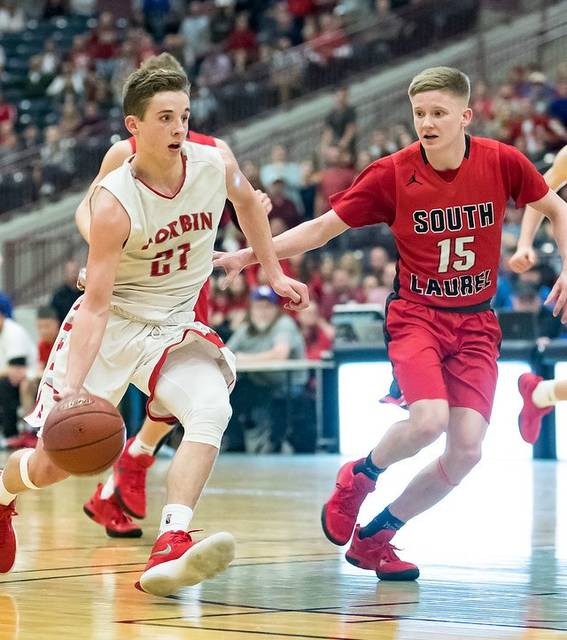 The fourth meeting between the two teams had more twists and turns than a rollercoaster, but in the end, converting free throws in overtime proved to be the difference.

Tony Pietrowski’s Redhounds (25-7) rallied from a 61-58 deficit with under two minutes remaining in overtime, and knocked down 5-of-7 shots from the free-throw line to lock up a 66-62 hard-fought win over the Cardinals (22-9). The regional championship victory marked Corbin’s first since 2010, and Pietrowski’s fourth overall as coach of the Redhounds.

“In my career here, it’s amazing how many time we’ve met for district and regional championships,” Pietrowski said. “There is a lot of tradition with the two schools, and Jeff (Davis) did a tremendous job tonight. Like I said, I’m putting this on my kids. I feel like I get a lot of good accolades. I do feel like I’m a good basketball coach, but I thought tonight our will in the second half and in overtime was special.

“We were going to figure out a way to get more points, and win the game, and we did that tonight.”

South Laurel needed some heroics to force overtime after leading throughout the contest. The Cardinals led 20-14 after the first quarter and 33-28 at halftime before seeing a 3-pointer by Ryan Anders send the game into a 42-all tie going into the fourth quarter.

But the heroics had just started.

The Redhounds led by as many as seven points (51-44) midway through the fourth quarter before Jeff Davis’ squad made a rally. Sophomore Matthew Cromer scored nine of his team-high 19 points during the period, including a 3-pointer at the buzzer to send the game into overtime at 57 all.

Cromer’s last second shot came just a few seconds before a 3-pointer by J.J. Ramey was negated after a timeout by Davis before Ramey released the shot.

“We were trying to get the ball down here closer, and call a timeout,” Davis said. “To be honest, I looked down and didn’t see him open, and called a timeout. In my I head, I said ‘I screwed it up.’ But I couldn’t act that way in the huddle. I kept telling them we’d get it, and sure enough, we got it, but hey, I make mistakes.”

South Laurel carried the momentum into the extra period of play, as baskets by Ryan Anders and Logan Madden gave the Cardinals a 61-58 lead with 1:50 remaining. A layup by Andrew Taylor cut South Laurel’s deficit to 61-60.

The Cardinals had an opportunity to build on the one-point lead, but missed three consecutive free throws, and the Redhounds took advantage of the situation. Chase Sanders converted with an old-fashioned 3-point play that gave Corbin the lead for good at 63-61. South Laurel converted on only 1-of-5 free throw attempts during overtime.

“I make mistakes, our players make mistakes, but we tried tonight, and that’s all I can ask for,” Davis said. “They gave their all tonight. They fought and believed. You know we don’t take one possession, or one play or one whatever, we just lost to a good basketball team. We gave ourselves some chances to win the game, and we had the game in hand going to the line, but you’ve got to hit them. Heck, some times the coach calls a timeout, and then we hit the three — and then we have a guy that hits another three to bail the coach out. I just love my team, and I hate that we lost. We were just one instance short.

Pietrowski said he was more than happy with the way his team never quit, and fought back from as many as eight points.

“We could have folded,” he said. “We had chances to lay down and we could have pointed fingers, but we didn’t. We showed resolve, which we didn’t have earlier in the year. The kids stayed in the moment and continued to get stops, and made big foul shots and made big baskets around the rim. There were a lot of ways we could have laid down and OK’d this loss. We kept bowing our back and figured out a way to win.”

“Last year, everybody knows we fell short in the championship,” he said. “We had a chip on our shoulder coming into this. We have been here before, and we got down early and we battled back. Me and my teammates just went into the locker room at halftime and said ‘we aren’t going to let this happen again.’

“We came out firing on all cylinders and battled our way back. Cromer made a really good shot, give him props for that, he’s a really good player and he played well in this tournament. That was a heartbreaker, but then we battled it out in overtime. I’m just proud of my teammates.”

For Pietrowski, he’s happy he and his Redhounds will be making a trip north to Lexington next week.

“I’m just glad to be back,” he said. “This is special. I’m taking my family back, and I’m getting to take my dad and my mom, which is really special to me. I’m taking Wendy, and my two kids, and Wendy has been through battles with me, and she ’s seen how hard it is to get back up there, and she gets to celebrate a little bit.

“You just never take them for granted. You never know when you’re going to get there. I’ve been in eight of these (region finals) now. I think I’ve won four — people do not realize how hard it is to get back to Rupp. If I could go around and watch every regional final game that would be a dream to me because it was all on the line, and I think we saw that tonight.”