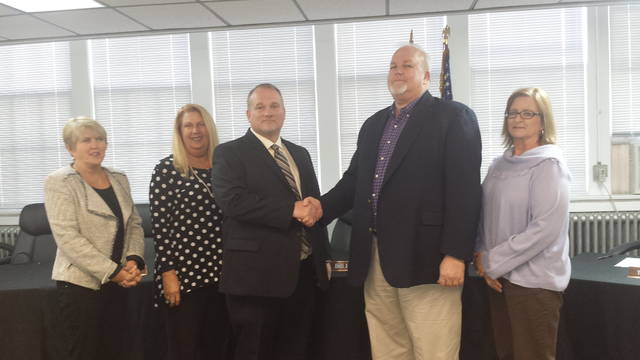 Director of pupil personnel Waylon Allen was welcomed to the Middlesboro Board of Education on Friday as the system’s new superintendent. From left, Charla Costanzo, Teresa Brown, Allen, Bill Johnson, Traci Barnett.

The Middlesboro Independent School District has found itself a new leader in long-time educator, Waylon Allen, who was chosen Friday during a special-called board meeting to be the district’s new superintendent.

“I would just like to say that I’m honored and humbled to be selected to lead this school system that I love so much,” said Allen. “It is my goal to make all of the decisions based on what’s best for the students of our district.”

Upon the resignation of former superintendent Steve Martin in September, the board has been working diligently to select the best candidate for the distinguished position. In the meantime, Allen has been temporarily filling in as interim superintendent, which coincidentally will have ended up acting as a warm-up for his new official title.

The decision will become effective on November 1; however, Allen does not plan to give up his current position as director of pupil personnel. Instead, the father of two plans to take on a dual position among the district, making him the very first Middlesboro Independent superintendent to do so. As a result, this will end up providing Allen with more insight into the needs of the students, as well as save the district a significant amount of money in the long run.

Allen began his career — after receiving his rank 1 at Union College — as a social studies teacher for the Harlan County School District, before transitioning to Middlesboro High School in 2005, when he became the school’s assistant principal. He has remained in the Middlesboro School District ever since, taking on various positions throughout the years, including: director of pupil personnel, assistant superintendent, interim superintendent and now the official superintendent.

The contract will begin at the beginning of November and will be active until June 30, 2021, resulting in a total of three years and eight months. During this time, Allen will make a $110,00 yearly salary for his dedication and exertion among the district.

Before adjourning, board member Bill Johnson announced the retirement of administrative assistant Sherry Hoskins, who has been a part of the district for 27 years. Her retirement will become effective next Tuesday.

“I would like to give her a big hand, because she does a lot around here, some of which we won’t even realize until she’s gone,” said Johnson.