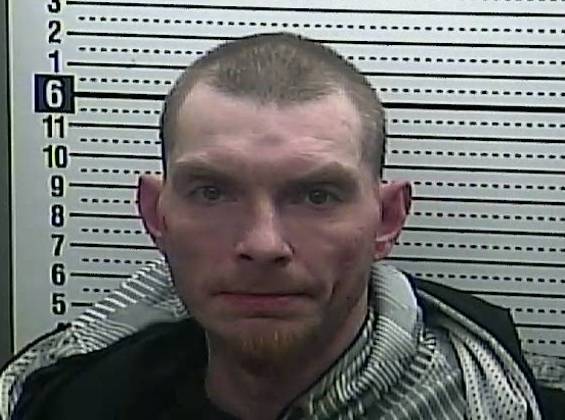 A Closplint man was ordered to begin serving a 10-year prison sentence after his probation was revoked recently in Harlan Circuit Court.

Blevins was granted probation following a plea of guilty he entered on June 19, 2015 on a two-count indictment charging him with cultivating marijuana and persistent felony offender.

The indictment stemmed from his arrest on July 7, 2014 by Kentucky State Police Trooper Brandon Burton.

According to the citation issued at the time of Blevins’ arrest, Kentucky State Police received a complaint of marijuana being grown inside a residence. Police made contact with Blevins’ mother, who gave them consent to search the residence inside and out. Police observed a path going into the edge of the wood line, locating four marijuana plants on the pathway. More plants were located where a burned structure had been cleaned up. The plants were growing inside pots, coffee cans and in the soil. Burton made contact with Blevins via telephone. Blevins confessed to police he was the only person involved in growing the plants. Blevins arrived at the residence and fully cooperated with police.

According to the order revoking probation, on June 19, 2015, Blevins was sentenced to a total of 10 years after entering a plea of guilty to both counts in the indictment. He was granted probation on the sentence for a period of five years, with three years to be supervised through the Office of Probation and Parole.

The probation revocation order states Blevins stipulated to the violations of his probation and waived an evidentiary hearing. His probation violations included using marijuana and cocaine and being arrested for fleeing police, trafficking a controlled substance, possession of a controlled substance and convicted felon in possession of a firearm. Blevins also absconded from probation by intentionally concealing his whereabouts and failing to report to a probation officer.

Hendrickson ordered Blevins’ probation revoked on Sept. 21 and remanded him into custody to begin serving his sentence.

In other court activity, Jeffrey S. Coker, 29, of Evarts, was ordered to begin serving a three-year sentence after his probation was revoked. Coker had been granted probation for a period of three years for two counts of second-degree trafficking a controlled substance.

See you at the pole

Photos courtesy of Bo Lee Schools all over the county and city met around the flag poles to pray for... read more