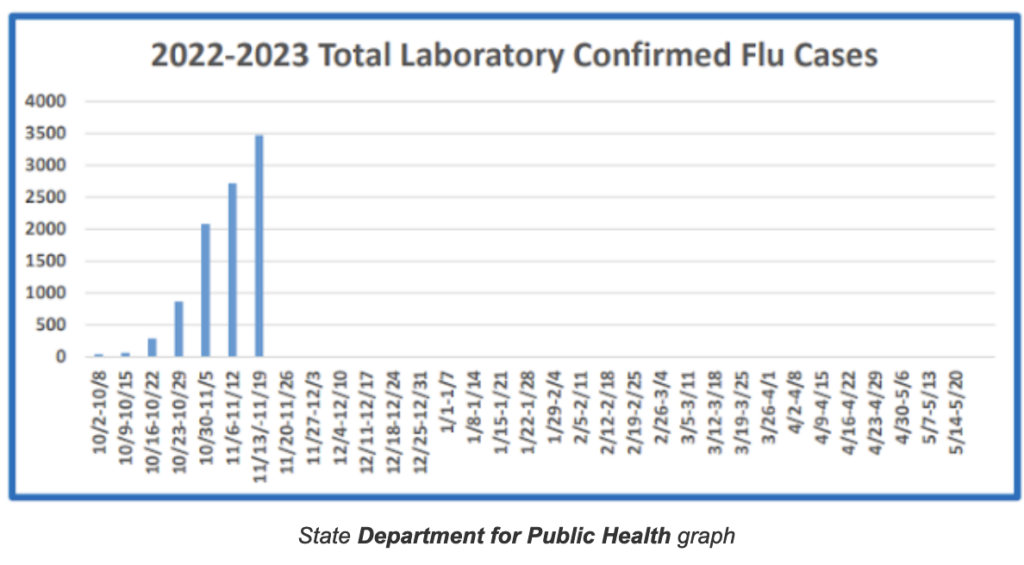 Influenza continues to slam Kentucky, with one hospital system saying last week’s flu admissions were greater than Covid-19 admissions and another seeing about equal admissions of both.

Last week, among all nine Baptist Health hospitals there were 155 flu admissions and 92 Covid-19 admissions, according to Kit Fullenlove, public relations director for Baptist Health.

“Over our entire system, flu and Covid cases have been pretty much neck and neck until late this week,” Fullenlove said in an e-mail.

One of the nine Baptist Health hospitals is in southern Indiana and is considered part of the Metro Louisville market; it accounted for 23 of the flu admissions and eight of the Covid-19 admissions.

On Nov. 30, a spokesperson for UK HealthCare said the hospital had a total of 47 flu patients, with 41 of them adults and six of them children, and 45 adult Covid-19 patients and less than five pediatric Covid-19 patients.

The hospitals are seeing fewer RSV patients. Baptist Health said it had fewer than 10 RSV admissions and UK HealthCare had a total of 24 such patients, 18 of them children and six of them adults.

RSV, or respiratory syncytial virus, is a common virus that usually causes mild, cold-like symptoms. And while most people recover in a week or two, it can be serious for infants and older adults.

The state’s latest flu report shows that flu activity in Kentucky continues to rise. In the week ending Nov. 19, the state confirmed 3,470 cases of the flu, up from 2,719 the prior week. So far, the total number of confirmed cases during this flu season is 9,531. Six Kentucky adults have died from the flu this season, which runs from October to May.

Most of the cases have been in Kentuckians under the age of 20.

“For November, we saw a 10 percent increase in ER visits, with the bulk of those patients coming in with respiratory symptoms. In the last seven days, those numbers escalated about 20 percent,” she said.

Further, she noted that in November, five of the Baptist Health hospitals hit an all-time high in the history of that hospital for the number of patients being seen in the ER in a single day: Corbin, Hardin, La Grange, Lexington and Louisville.

“An annual flu vaccine is the best way to protect against flu. Vaccination helps prevent infection and can also prevent serious outcomes in people who get vaccinated but still get sick with flu,” says the Centers for Disease Control and Prevention. “CDC recommends that everyone ages 6 months and older get a flu vaccine annually. Now is a good time to get vaccinated if you haven’t already.”

All 16 of Kentucky’s health regions have confirmed flu cases, and nine of the 16 are reporting that their rates are increasing.