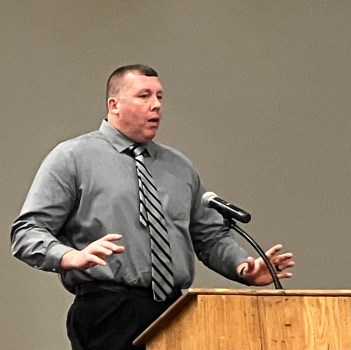 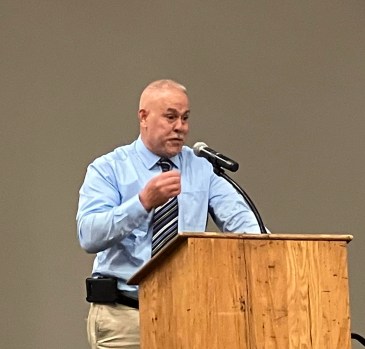 Lunsford was allowed to respond when asked how the candidates would address the drug and theft problems in Harlan County should they be elected.

“I’ve been fighting drugs for the past 33 years,” Lunsford said. “I worked in the sheriff’s office back in the early 2000s, from 1999 to 2007. Back then, we did our own drug stuff along with the detective. We did the same investigation; we did the theft investigation.”

Lunsford said in his experience, most thefts occurred because of drug issues.

“You have to continue to do the drug investigations,” Lunsford said.

Brewer then responded to the drug and theft question.

“First of all, I think our number one tool in law enforcement is patrols,” Brewer said. “That takes care of a lot of theft issues, especially targeted patrols around our hot spots in the communities. But I don’t want to take the same old, same old approach with our drug problem.”

Brewer said he would employ multiple tactics to combat the county’s drug issues.

“I want to take a three-pronged attack to it, which is education, recovery, and enforcement,” Brewer said. “The education is, I want to set up an anti-drug program in our county and city and increasing in schools in the county to educate our children against drugs. Recovery, I want to have our deputies educated on all resources we have in the county. That way, if we have somebody who wants to change their life, we know which way to send them. In enforcement, I can promise that no drug dealer will go unchecked in Harlan County.”

Brewer acknowledged the drug problem could not be stopped entirely.

Robinson then asked what type of supervisory experience the candidates have which would help them to lead and staff the sheriff’s office.

“I’ve had 17 years total with the Harlan County Sheriff’s Office,” Brewer said. “I was promoted under a previous sheriff to sergeant around 2013, so I’ve had about eight or nine years in supervisory experience.”

Brewer noted he has experience in court security, as a school resource officer, patrol supervision, and as a detective.

Lunsford then talked about his experience.

“I’ve got 33 years experience in law enforcement,” Lunsford said. “20 of them have been in supervisory positions. The last eleven years, from 2011 up until this year, I’ve been Chief at Loyall (City Police Department), where I’ve conducted a lot of drug investigations myself. I was second shift supervisor at the Harlan County Sheriff’s Office for about four or five years.”

“I’ve been to the Academy of Police Supervision, which is a course you have to take in Richmond,” Lunsford said. “I’ve had that training, and I’ve had training in orientation for new police chiefs. I’ve had several things in drug and supervisory type training.”

The voters go to the polls for the General Election on Nov. 8.