State rep. candidates share their views on the issues at forum 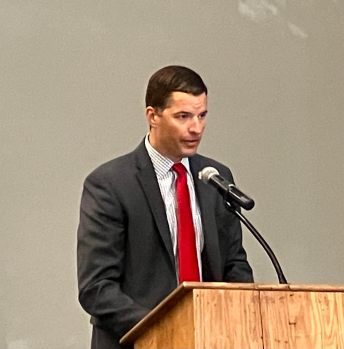 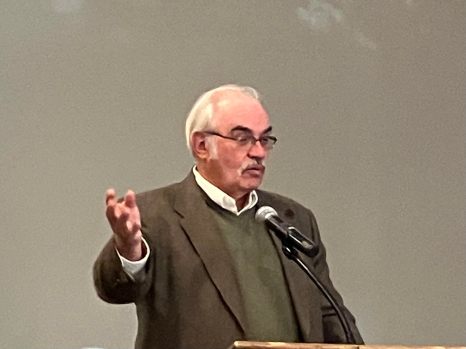 Candidate for Kentucky State Representative for the 87th District Gary Smith was on hand for the Harlan County Chamber of Commerce’s Candidate Forum on Thursday. (Photo by Joe Asher)

The Harlan County Chamber of Commerce sponsored a candidate forum at the Harlan Center on Thursday, with candidates on the ballot in Harlan County taking part to give their views on some issues important to voters.

Area television personality Brandon Robinson served as the moderator for the event.

The first candidates to take the stage were Adam Bowling and Gary Smith. Both men are candidates for the office of Kentucky State Representative for the 87th District.

Robinson asked the candidates what they believe to be Harlan County’s biggest obstacle to economic development and how they would use the office to address the issue.

“Historically, Harlan County’s biggest obstacle to economic development is not one issue, it’s a lot of separate issues,” Bowling said. “But historically, it’s been infrastructure and roads in Harlan County.”

Bowling pointed out he was in high school in the early 1990s when a project to extend U.S.-421 to the Virginia state line was first planned.

“It was supposed to be completed by the late 90s or 2000,” Bowling said. “That project has not seen work on it since 1998. I’m proud to say the first day I came into Harlan County, I drove U.S.-421 all the way to the Virginia line … I didn’t make any promises then, I’ve never made promises, but I promised I would get to work on it, and that’s exactly what I did.”

According to Bowling, $22 million in funding has been secured for the road.

“Coming in the summer of 2023, that road – for the first time in 25 years – will be completed to the Virginia line,” Bowling said.

Bowling pointed out roadways in and out of the county is an important factor.

“For businesses who want to come here and open shop, that’s a huge thing,” Bowling said. “We have funded infrastructure, roads, broadband, economic development – $100 million set aside for rural economic development, I was the lead sponsor of that bill, but getting U.S.-421 finished to the Virginia line, that’s going to be the first step.” Smith responded to the same question.

“I happen to agree with Representative Bowling that transportation is a big issue,” Smith said. “There are other roads that need some attention. I think it would be good for US 119 to be four lanes from here to Pineville. That way, you’d have a four-lane road all the way into Harlan from I-75.”

“Education is a big issue,” Smith said. “Employers are looking for highly skilled folks. We need to have some vocational training for our students out here so that businesses that want to come into Harlan County can have a really good, educated workforce.”

The candidates were also asked for their opinion on changing the tax system to address electric vehicles not being required to pay road maintenance taxes that are placed on gasoline purchases at the pump.

“I think it needs to be a while before we go that route,” Smith said. “We have a lot of gasoline vehicles left … Eventually, probably yes, but currently I don’t see the need right now because there aren’t that many charging stations or electric vehicles in this area and it will probably be a while before there are. Then we can consider doing that.”

Bowling then responded to the same questions.

“We have amended the law already on charging for electric vehicles,” Bowling said. “Before, they were basically using the roads for free … I think historically what we see is people that could most afford it are able to afford the electric vehicles first, and people that aren’t able to afford that are kind of the last ones to the show, they’re the ones basically funding the roads for people with electric cars.”

Bowling said this revenue is now addressed when the vehicles are registered.

“We’ve added a registration for electric vehicles and hybrid vehicles depending upon fuel economy, so we collect those up front on electric cars,” Bowling said. “Right now, all that money goes 100 percent to the state. We’ve got to make sure that our counties and our cities are able to share in that revenue that we are collecting for that, because it is the wave of the future.”

The general election is scheduled for Nov. 8.