Evarts to host Rock the Block on Saturday 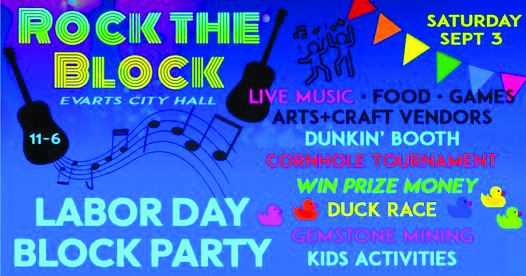 The city of Evarts is the location for a Labor Day weekend celebration, with Evarts Tourism’s Rock the Block event set for Saturday, Sept. 3.

Most of the day’s activities will occur in the parking lot of Evarts City Hall in downtown Evarts.

Evarts City Clerk Kristi Lamb talked about some of the attractions available for young and old at Rock the Block.

“It’s been about five years since the last one,” Lamb said. “It’s a Labor Day Block Party, starting at 11 a.m. on Saturday.”

Lamb said the event, organized by Evarts Tourism, will feature many different activities and attractions for the folks who come out for the party.

“They are going to have food vendors and craft vendors,” Lamb said. “There will be games for the kids to play with prizes. They are also selling tickets for the Evarts Fire Department on a chance for a 65-inch television which will be won via a drawing at the Cops 4 Kidz event in December.”

The event will also feature a dunking booth, face painting, and live music.

“There will be three music acts,” Lamb said. “The headlining act will be Midnight Rider.”

Midnight Rider is a five-piece band performing various energetic music, including classic rock, southern rock, and country. Midnight Rider will be taking the stage at 5 p.m.

There will also be a duck race featuring dozens of artificial ducks floating toward a finish line to determine the winner.

Lamb explained the tickets will have a number between 1 and 100 on them. The ticket holder with the winning duck’s number on their ticket will take home the prize money, which could be as much as $1,000 depending on the number of tickets sold.

Lamb said the duck race has been popular at previous Labor Day events.

“When they first started doing the Labor Day Festivals, they did a duck race for three or four years,” Lamb said.

In addition to the duck race, there will be tickets available for cornhole for $10 for teams, Gemstone Mining tickets are $5, and the Dunking Booth will be $5 a try. Other kid’s activities, including face painting, are free of charge.

Vendors on site will include Pizza Hut, Snow Bunnies Snow Cones, the Wallins Ladies Auxiliary BBQ, Just Peachy Bakery, and many others.

“We want the whole community involved,” Lamb said. “We want people that are here visiting from out of state to ride ATVs or go the Labor Day Reunion to come. Everybody should come out and have fun.”