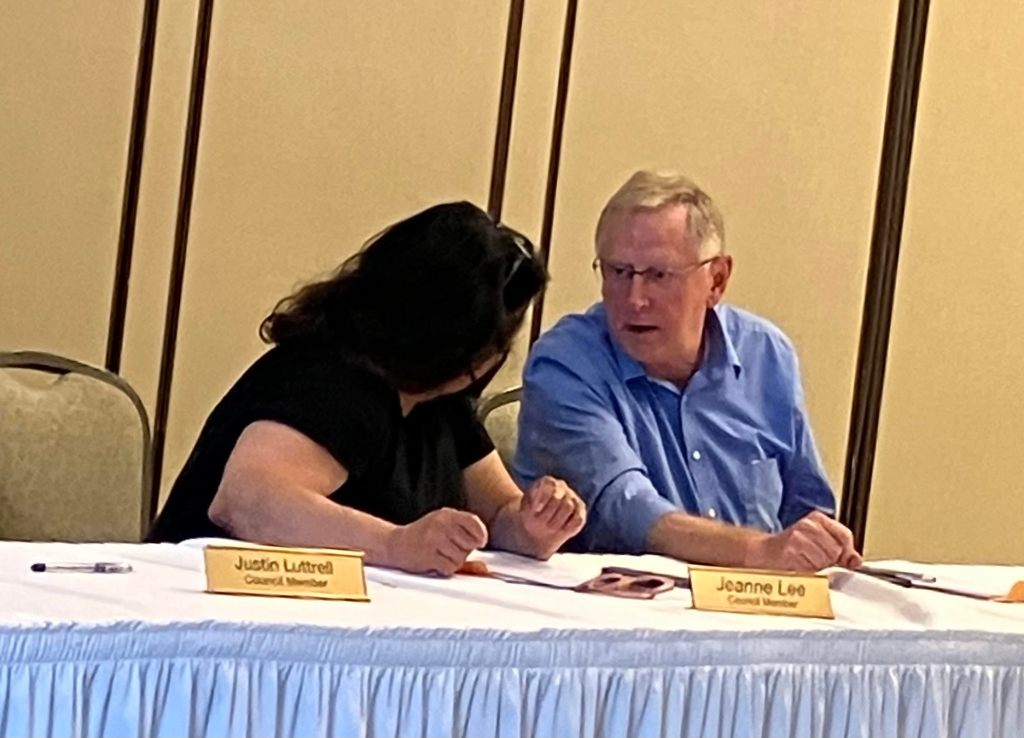 The Harlan City Council heard an update on road and sidewalk projects in the city during the panel’s meeting on Monday.

Mayor Joe Meadors called the meeting to order and brought up the topic of sidewalk upgrades.

“We’re dealing with this sidewalk, and we’re getting closer,” Meadors said. “But I’m telling you, getting these sidewalks built – I believe we could have launched a rocket to the moon and it may have been easier – we’ve had to take pictures, we’ve had to measure every foot of sidewalk that touches another piece of property we’ve had to take a picture of the property, locate it on a map, and some of those sidewalks are so narrow the utility poles are right in the middle of the sidewalk.”

Meadors told the council while there have been multiple obstacles, he believes the work will begin soon.

“Hopefully, we’ll be able to do something in the next three or four weeks,” Meadors said. “We’re getting real close.”

Meadors also talked about some repaving work that will occur on a state road that runs through the city.

“They are going to repave KY 72 at US 421 at Dressen to the roundabout,” Meadors said. “When that will be done, I’m not sure. I’m assuming it will be done before Fall.”

He also talked about needed repairs to the bypass (US 421).

“They realize there are many people complaining – and rightly so – I venture to guess you could not show me another federal highway that’s in that bad shape,” Meadors stated. “They are trying to deal with it. It is a major project, it will almost be like building a new road.”

Meadors explained all the blacktop must be removed.

“They will go back down to the surface,” Meadors said. “There are some serious problems underneath this blacktop, and if they just go back over it with new blacktop, they’ve not done a thing. It’ll do the same thing in a year or two.”

Plans to widen US 421 may also be in motion soon.

“It appears like they’re going to try to do the construction on US 421 to the Virginia line, “ Meadors said. “We should be hearing something on that in the next two or three months. There’s progress being made, it’s just not fast enough to suit me.”

Inside the city, paving work on Clover Street may begin soon.

“We did get the money to pave Clover Street from Second Street on up to the elementary school and Williams Street up to Mound Street,” Meadors said.

Meadors explained the work needs to be done while school is not in session.

“The pavers don’t understand what it means if they come in here when school is going on,” Meadors said. “It will absolutely be chaos. They’re either going to have to do it before school starts or they’re going to have to wait until Fall break…we’re trying to get that scheduled.”

Meadors indicated paving work in the Fairview community will likely have to wait until the Spring.

“We’re hopeful we’re going to get some more discretionary paving money from the Governor’s Office,” Meadors said. “That’s supposed to be coming down in the next couple of weeks.”

Meadors reminded the council the city had requested $150,000 in discretionary funds and has received $15,000.

Meadors told the council the chances seem good that the next disbursement will be greater than the $15,000 already received.