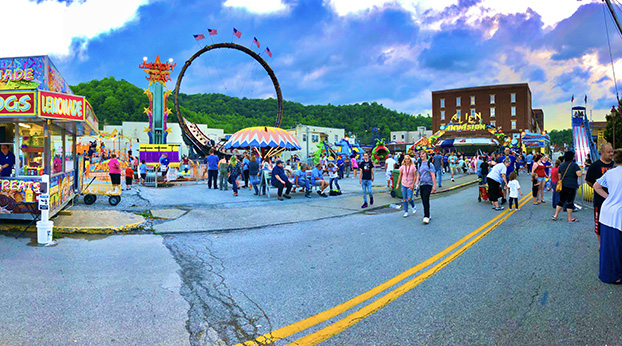 The most anticipated yearly event in Harlan County is nearing, with the 67th installment of Harlan County’s Poke Sallet Festival set to kick off during the first week of June.

Harlan County Judge-Executive Dan Mosley highlighted some of the attractions on tap for this year’s festival during a recent interview.

“Events kick off May 31 and go through June 4,” Mosley said. “The actual festival itself is June 2 through June 4, but May 31 – which is a Tuesday – is the Miss Harlan County Pageant. That kicks the week off.”

Mosley also announced the return of 4H Kid’s Day on June, 1, with the event returning to Huff Park this year after a two year absence due to COVID-19.

“The last two years, 4H Kid’s Day has been held in a virtual fashion,” Mosley said. “We’re very excited to see it back, the Harlan County Extension Office does a great job organizing it.”

He said the carnival attraction will open that same evening.

Mosley also mentioned some of the entertainment lined up to perform on the various Poke Sallet Festival stages.

“The Thursday evening headliner is a contemporary Christian band, Sidewalk Prophets,” Mosley said. “We had them here at the festival several years ago, they’re very good…we’re excited to bring them back to Harlan County.”

The rest of the Thursday night lineup is still being confirmed, with many local praise and worship teams expected to perform.

“We’ll also have the semi-finals of the Voice of Poke,” Mosley said. “The auditions take place May, 17, and 19, usually we’ll have 10 semi finalists who will advance from the auditions to Thursday night. That will be from 5 p.m. until 6:30 p.m.”

Friday will bring a country music chart topper to the stage to headline the day’s performances.

“Our country headliner this year is going to be Jameson Rodgers,” Mosley said. “He had a hit that soared up the charts about six months ago, “Bet You’re from a Small Town.” It went up the charts fast. He will be here on Friday, June 3.”

The opening act for Rodgers will be local band Kudzu Killers.

“Also that evening we’ll have performances from DM and the 1601s and Lacy Deaton and Company,” Mosley said. “We’ll also introduce the winners of the Miss Harlan County Pageant and introduce the Voice of Poke finalists.”

Mosley pointed out the Voice of Poke finalists will compete on Saturday, June 4, during the final day of the festival.

“We are still assembling the rest of the Saturday lineup,” Mosley said. “Our headliner will be Dressed to Kill, our local KISS tribute band with a full pyrotechnic show that will come along with that.”

“We’re having Ohio Valley Wrestling back,” Mosley said. “We had them here last year…it was a huge hit.”

“Their first festival was last year’s Poke Sallet Festival,” Mosley said. “It was a huge hit, so we’re bringing them back on Saturday.”

The wrestling will begin at 7:30 p.m. on Saturday, June 4. Once the wrestling is completed, Dressed to Kill will hit the stage.

“Prior to Ohio Valley Wrestling, local band Midnight Riders will perform,” Mosley said. “Some of the folks that used to be involved in Thunder Ridge have formed Midnight Riders. Prior to that, we’ll have the Voice of Poke finals at 5:30 p.m.”

Mosley also mention the gospel music stage is returning to the Plaza outside the Harlan Center this year.

“It will be back out on the Plaza next to Clover Street,” Mosley said. “The Coffmans are headlining that stage. It will start on Saturday, June 4, at noon and run until approximately 8 p.m.”

Mosley mentioned also returning for this year’s festival is a bluegrass music stage.

“We’re really excited to bring back something we haven’t had in a few years, and that’s a bluegrass stage,” Mosley said. “We’re going to have the bluegrass stage on the courthouse gazebo between the Justice Center and the courthouse. We’ve got local bands Pine Mountain Grass and Last Time Out performing. We also have a band that’s going to come to us from the south-central Kentucky area called Kentucky JustUs. They are a family, I got to hear them at the Lincoln Day Dinner in Corbin a few weeks ago, they’re one of the best bluegrass bands I’ve heard in a long time.”

“Of course, we’ll have our traditional things such as vendors, arts and crafts, food, and inflatables at Huff Park, it’s shaping up to be a good festival,” Mosley said.

The Poke Sallet Festival returns to Harlan June, 2, through June, 4.