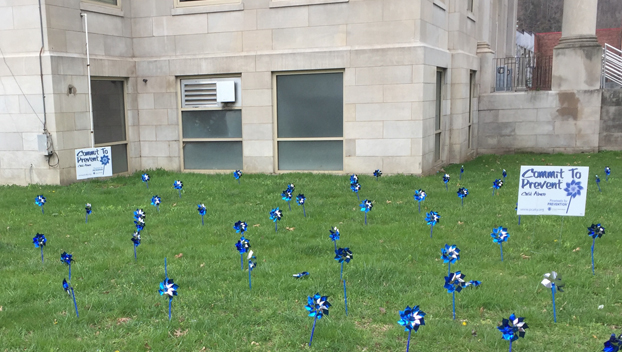 April is National Child Abuse Prevention Month, and Harlan County has been recognizing the month by taking part in Pinwheels for Prevention for many years, displaying a number of pinwheels on the courthouse lawn.

Cathy York and Peggy Brackett, of Family Resource And Youth Service Centers, were at the Harlan County Courthouse on Thursday to kick off Child Abuse Prevention Month.

“We are trying to raise awareness of child abuse,” York said. “We have put out the pinwheels as a reminder that April is Child Abuse Prevention Month.”

According to York, the group is promoting safety for children at home as well as other places.

“We’re just hoping this will cause people to stop and think, and ask questions,” York said, referring to the large number of pinwheels displayed on the courthouse lawn.

York mentioned that this is an annual event that has been going on for at least 10 years.

“Child Abuse Prevention Month is a chance for all of our agencies in Harlan County to come together to raise awareness and support each other in our efforts to educate parents and caregivers in the community on how we can prevent child abuse, how we can help protect all the families and children in our community,” Adams said. “One of the ways we do that is by working together with all the agencies in town and Prevent Child Abuse Kentucky.”

York noted if anyone suspects child abuse is occurring, there are avenues to report the issue.

“You can call child protective services,” York said. “They can call Kentucky State Police and let them know. If it’s something that’s in progress, they can call 911. It’s everybody’s responsibility to report child abuse, whether it is physical abuse, mental abuse, neglect, child abuse is not just physical. It’s up to all of us to report it if we suspect it.”

More information can be found at the Prevent Child Abuse Kentucky website at https://pcaky.org.