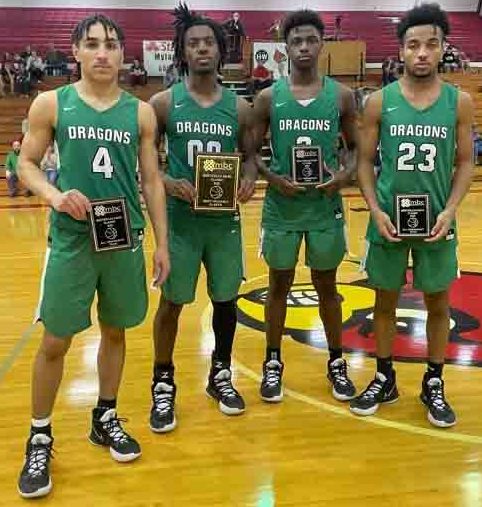 Junior forward Will Austin added nine and Kaleb McLendon had eight for the Dragons. Jaedyn Gist and Kyler McLendon each scored six while Johann Gist and Matthew Pennington chipped in with two apiece.

“I think we have a lot of room to improve,” said Harlan coach Derrick Akal. “But we competed and played hard.”

Grant Strong, a senior guard, paced Clay County (8-4) with 21 points. Keaton Arms tossed in 13. Harlan held a 14-13 advantage after eight minutes of play and led 31-30 at halftime. The Dragons trailed 46-43 entering the final period, but outscored the Bulldogs 13-8 in the fourth quarter to win.

The 9-4 Green Dragons played at home on Tuesday against 15th Region power Pikeville. Harlan will host Red Bird (2-8) in the quarterfinals of the 13th Region All “A” Classic on Saturday at 7 p.m.

The semifinals are scheduled for Jan. 11 and the championship on Jan. 13 at HHS.

Akal fired in 28 points as Harlan defeated the host Cardinals 66-64 on Tuesday.

The Dragons hit 12 3-pointers. Akal made six and Kaleb McLendon had four.

The Green Dragons were 12 of 26 from the free throw line while Wayne County hit just one of four.

The Cardinals fell to 5-7 on the season.

The senior, who recently reached the 2,000 point-mark at Harlan, fired in 43 points as the Green Dragons nipped Southwestern 87-84 in the opening game of the Monticello Bank Classic.

Akal nailed nine treys and eight of eight free throws on the night.

Akal hit five 3’s as the Dragons grabbed a 20-15 led at the end of the opening quarter.

Kaleb McLendon nailed a trio of treys as Harlan took a 45-38 advantage at halftime.
The game was even at 63 after the third period.

Akal scored 16 points in the final quarter as the Dragons escaped with the victory.