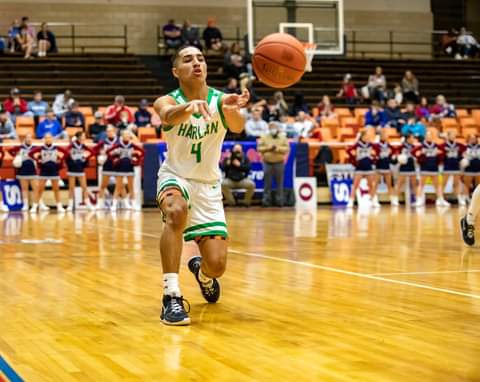 Harlan Junior guard Kaleb McLendon made a pass in a recent game. The Green Dragons fell to Pikeville and Perry Central this past weekend. (Photo by Jon Dickenson)

BY PAUL LUNSFORD/Contributing writer        The Harlan Green Dragons ran into stiff competition over the weekend against Pikeville and Perry Central. Two of the top teams in the 15th and 14th Region, respectively.

Harlan played at Pikeville on Friday and meet the Commodores in Hazard on Saturday in the D.J. Begley Classic.
Senior forward Landon Napier poured in 27 points on Saturday in a 68-59 loss to PCC.

The Commodores also got 17 points from freshman point guard Rydge Beverly and 10 points from junior forward Tyler Day. Dylan Knight added six.
Perry Central made 22 of 44 from the field.

Napier had nine points in the opening quarter as Perry Central took a 16-12 lead. Akal scored six for Harlan.

Day knocked down eight points in the second period and the Commodores went into the half leading 32-26.

Akal poured in 10 third-quarter points, but the Dragons trailed 47-41 entering the final quarter.

Perry Central connected on 13 of 19 free throws in the fourth period and outscoring Harlan 21-18 in the quarter. Beverly scored 10 and Day had nine in the last eight minutes of the game.

It was he second meeting between the two teams in eight days. The Commodores edged Harlan 55-54 in the semifinals of the WYMT Mountain Classic on Dec. 10.

Perry Central will participate in the Arby’s/KFC Classic at McCreary Central this week.

On Friday, Pikeville (5-0) made 13 3-pointers and scored 20-plus points in all four quarters in rolling to the win.

Junior guard Rylee Samons fired in 27 points and Nick Robinson, a senior forward, poured in 24 for the Panthers.

Robinson scored eight points in the first period as Pikeville led 23-16 after one quarter.

Samons poured in 12 second-period points as the Panthers extended the lead to 50-32 at halftime.

Harlan (3-3) will play Dixie Heights (5-1) in the opening round of the Legacy Nissan Dribble Drive Challenge at South Laurel on Tuesday at 3 p.m.

All teams will play three games each in three consecutive days.