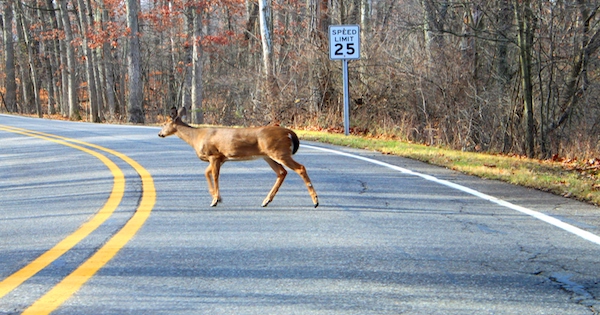 FRANKFORT – The Kentucky Transportation Cabinet (KYTC) is issuing an “Antler Alert” to remind motorists that it’s peak season for highway collisions involving deer and other wildlife on the move.

“Shorter days and cooler nights, October through December, bring a noticeable increase in highway collisions involving deer,” KYTC Secretary Jim Gray said. “Drivers should be vigilant at all times, but the autumn presents a special challenge for drivers, with deer and other wildlife increasingly on the move, often at night.”

Every year, State Farm Mutual Automobile Insurance Co. issues a closely watched report of collisions involving deer and other wildlife, based on insurance claims. For the year that ended June 30, 2020, State Farm reported more than 1.9 million animal collision claims in the United States, of which 1.5 million involved deer.

On average, U.S. drivers have a 1 in 116 chance of a collision with an animal. Kentucky ranks above the national average and 18th among the states at 1 chance in 88. Drivers in neighboring West Virginia run the highest risk – 1 in 37, according to State Farm. (View the report here.)

As the report notes, highway crash rates involving wildlife increase sharply in October, November and December with mating seasons, hunting seasons and fall harvests, which will prompt deer to roam in search of new hiding places and sources of food.

In Kentucky, 2,091 highway crashes involving deer were reported to police in 2020, according to a data base maintained by Kentucky State Police and closely followed by the KYTC Office of Highway Safety. Of that total, 123 occurred in Boone County – more than in any other county. Rounding out the 10 highest totals were Christian County (101), Hopkins County (95), Campbell County (93), Hardin County (86), Warren County (85), Muhlenberg County (75), Pulaski County (70), Henderson County (69) and Franklin and Kenton counties (68 each). A complete list is here.

Motorists are asked to report all deer-vehicle collisions to police. KYTC traffic engineers use the crash data to aid in placing deer-crossing warning signs and other safety measures.