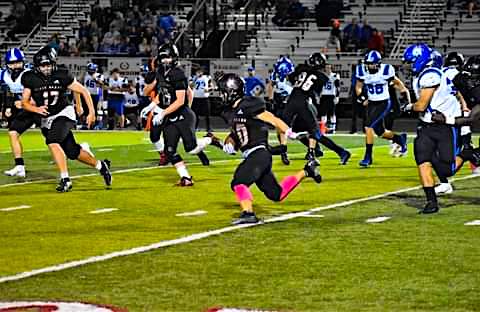 Letcher Central scored 45 unanswered points and gained 464 total yards as the Cougars rolled to a 51-14 district victory over Harlan County on Friday.

Adams connected with Little for a 40-yard touchdown pass at the 7:36 mark of the opening quarter.

“I told the kids that was the best quarter we’ve played all year,” he said.

The Bears responded with a 10-play, 70-yard drive as Marco Hopkins went in from the 3 with 10:11 left in the first half. Hopkins added the two-point conversion to lead 8-6.

Adams scored two touchdowns on runs of 7 and 54 yards. He also added the conversion runs to make it 22-8.

Haning had two TD receptions from Adams for 62 and 46 yards. Adams and Blair each had two-point conversions as the lead swelled to 38-8 at halftime.

In the third quarter, Adams raced 26 yards for a touchdown and found Hayden Breashear for a 49-yard touchdown pass. Little added the extra point to make it 51-8.

Harlan County would score late in the fourth quarter on a Hopkins 5-yard run.

The Cougars had 13 first downs while HC collected 10.

Letcher Central will travel to Manchester to take on the 4-2 Clay County Tigers on Friday.

The Black Bears will be open this week before visiting Johnson Central on Oct. 15. The Golden Eagles defeated Clay County 42-6 last week.

HC returns home Oct. 22 against Perry Central in a key district showdown. It will also be Senior Night.