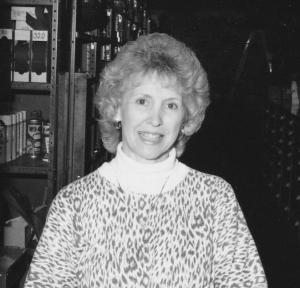 Catherine “Cathy” Delores Roberts of Owensboro, Kentucky was born in Bristol, Tennessee on October 27, 1930 to Rebecca Jane Stricklin Harris and Reverend Richard Winston Harris. She departed Earth and went to Heaven on August 19, 2021, where she is being welcomed by many.

Cathy began working with the Pinkerton Tobacco Company in Toledo, Ohio in May 1967 and transferred with the company to Owensboro, Kentucky in December 1972. She was a Tool Room Clerk for many years before she retired from the company in 1996 to spend time with her grandsons whom she enjoyed many adventures with through the years.

Cathy loved Eastern Kentucky and lived with her parents and two cousins, Lula Francis and Pauline for several years at Lynch, Kentucky where she attended High School. Her mother, Rebecca kept boarders in their home and her father, Richard was a coal miner and preacher. There was nowhere Cathy would rather be than in the mountains and when she wasn’t, she said they were always “Calling her home”.

Cathy had a wonderful voice and sang in her father’s church. She was so good that she began to travel to other churches in the area to sing to their congregation. One of her fondest memories was singing and starring in the production of Snow White and the Seven Dwarfs while in high school. In her later years she liked to write songs and sing to her children.

In 1946 she married James Cleo Roberts from Fork Ridge, Tennessee who had recently returned from WWII.

Their courtship began when he started walking her home from church. It wasn’t long before he won her heart and they were married on April 10th of that same year. She wore a beautiful lavender suit that she and her mother picked out and they honeymooned in Middlesboro, KY. The couple later moved to Toledo, Ohio where their two daughters were born. It wasn’t long before other family members made the move north as well. “Clee” and “Dee”, as they were known by their family members, spent their weekends with many friends and family often playing cards. They were married for 25 years before divorcing but remained friends until his death in 1997.

Cathy loved adventures, exploring new places, and was an avid “rockhound” who collected rocks from everywhere she visited. She enjoyed wading in Looney Creek and pulling out interesting rocks anytime she was visiting Lynch.

She had a story for each unique rock and displayed them proudly in and around her flower beds.

Weekends were often greeted with “Get dressed, we are going on a drive” and you never knew where you were going or what you would find, but she always made it fun. She made life interesting and instilled a love of travel and exploration in her children. Cathy had a zest for life and documented her travel and adventures thoroughly with her wonderful photographs. She was so fond of taking photographs that her family often teased her that “It didn’t actually happen if there wasn’t a photo of it”.

She loved to play Rummy and taught her children to play at a very young age. She was a tough competitor, and it was difficult to win against her. She passed her passion of playing cards and board games on to her children and grandchildren. Any holiday or celebration gathering always included a game night. Many fond memories were made sitting around the table laughing and talking while playing.

If there was a Kentucky Wildcats basketball game on you can bet, she was either watching it on television or listening on the radio. She enjoyed discussing the games afterward. One of her favorite memories was attending a game at Rupp Arena with her grandson Matt.

Graveside service will be held at 11:00 a.m., on Saturday, August 28, 2021, at Green Hills Memorial Gardens Mausoleum in Middlesboro, KY.

Register book and online condolences are available at www.cawoodfh.com

Cawood Funeral Home, Middlesboro, KY, is in charge of arrangements. For the health and well-being of our staff and the families we serve, we request that social distancing be observed and everyone in attendance wear a mask.