Kayla Kowalik ready to be a senior star for UK 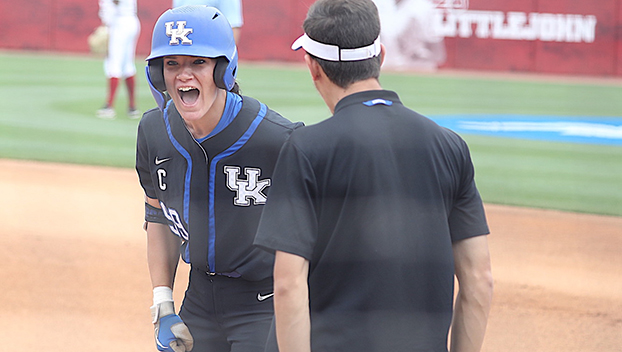 Kayla Kowalik had a lot to be excited about last season, especially since some told her when she was young she could not be an elite level softball player. (Vicky Graff Photo)

Kayla Kowalik had an amazing softball season when she led the NCAA in batting average and total hits and was second in runs scored per game. The junior catcher led UK in stolen bases and hit 12 homers to earn All-American honors.

I wondered if there was someone who inspired her with words of encouragement or motivated her by saying she could not make it big time when she was growing up.

“I am the kind of person that likes to move on and words don’t really bother me much,” Kowalik said. “When I was young, you are impressionable and softball was really not that serious but I had some people tell me that I could not do things or that I wouldn’t do this or that.

“I would not necessarily say that is what drives me. I don’t have negative drivers. I have positive drivers and coaches.

After that (negative) experience some people helped me out with positive reinforcement and their belief in me is what made me strong.

“I don’t like to dwell on the negatives. I have done my part to prove that wrong and like to move on. But when you are 10 years old and someone tells you that you are not going to be good and you can’t do something, it is going to stick with you.

“I am going to be 22 this year and it does not really bother me any more. I think it is kind of funny but I do remember what I was told.”