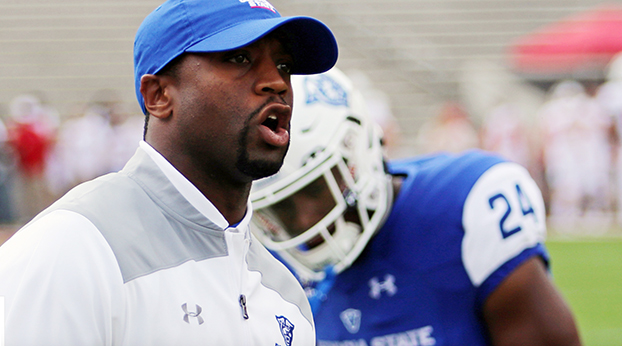 Nathan Fuqua was an all-state defensive lineman at Danville High School who knows plenty about the University of Kentucky football program.

Fuqua, 1999 Danville graduate, went to Wofford to play and was a four-time All-Southern Conference nose guard and two-time All-American, including first team in 2002. He joined the Wofford coaching staff in 2005 and that’s the role he had when he first met new UK defensive backs coach Chris Collins.

“I recruited him for Wofford. He went to Western Carolina but we played against him,” said Fuqua, now the defensive coordinator at Georgia State.

Collins followed the same path as Fuqua and started his college coaching career at his alma mater in 2010. Fuqua crossed paths with Collins during recruiting. Collins wept a year as defensive graduate assistant coach at Appalachian State under the defensive coordinator Fuqua played for at Wofford.

“When I had the opportunity to come to Georgia State and got the chance to bring a new guy with me, I knew his background and who he was as a person. I knew I wanted to give him that opportunity to be on my staff,” Fuqua said. “It has been really great to have him in my foxhole with me and watch him grow and blossom.

“I knew at some point in time the more connections he made and the more success he had that some teams were going to want him. But you want to have young guys working for you who have success and who do great things and he has done that and will keep doing it.”

When former UK staff member Brian Landis, now the linebackers coach at Georgia State, found out coach Mark Stoops had an opening for a defensive backs coach he recommended Collins.

“I figured it was going to happen,” Fuqua said. “I know he didn’t waste any time hitting coach Landis up for areas to live in and he knows (linebackers coach) Jon Sumrall and (defensive coordinator) Brad White. We went up there last year and talked ball with those guys.”

Here is one bit of irony — Collins’ position coach at Western Carolina during his playing career was Steve Clinkscale, the defensive backs coach who left UK for Michigan. Now Collins has his former coach’s job.

“That’s kind of cool the way that worked out,” Fuqua said. “Clinkscale did a great job and was a good guy but Chris is a good fit with Sumrall and those guys. It’s going to be fun to watch them together.’

“I am going to get my brother to give him (Collins) some golf lessons, too. He needs them,” Nathan Fuqua said.

Collins doesn’t mind a playful jab from Nathan Fuqua. He considers him a mentor.

“He has been a tremendous influence in my life,” Collins said. “He recruited me coming out of high school. He’s a great guy and I really enjoyed working with him.”

Nathan Fuqua knows Collins is joining a secondary that has been putting players into the NFL and ranking among the best in the Southeastern Conference. He thinks Collins will be fine coaching-wise as well as on the recruiting trail. Collins was Georgia State’s recruiting coordinator and earned Fuqua’s respect.

“He has really good communication on and off the field. He can relate to a lot of guys,” the Georgia State defensive coordinator said. “He has some great recruiting ties in Georgia and has been making some good connections in South Florida for us. He has that North Carolina background that helps him recruit there. He just does a really good job at whatever he does. He will be great at Kentucky. I hated to lose him but I am also really happy for him.”