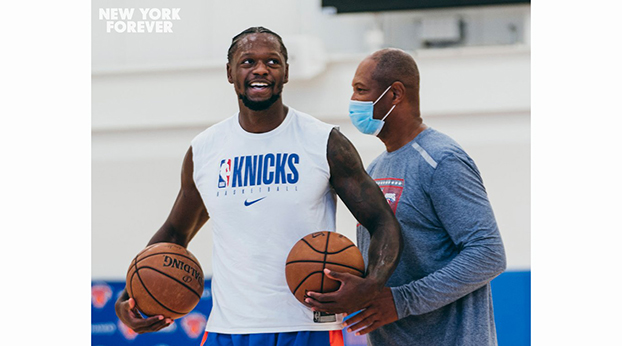 Assistant coach Kenny Payne, right, has worked his magic this season by turning Julius Randle into one of the NBA's best players. (New York Knicks Photo)

Former Kentucky star Julius Randle has had an MVP-like season for the New York Knicks who went from 21-45 last season to 41-31 this year to earn the team’s first playoff berth since 2013 as the No. 4 seed in the Eastern Conference playoffs.

Tom Thibodeau is in his first season as New York’s head coach but this is also the first season for assistant coach Kenny Payne who coached Randle at UK along with Nerlens Noel, Kevin Knox, and Immanuel Quickley — other former Cats playing for the Knicks.

New Indiana coach Mike Woodson, an assistant coach with the Knicks this season until he got the college job, told SNY TV’s Ian Begley that Payne deserves credit for Randle’s performance.

“I wouldn’t call it a surprise because he’s been a pretty solid player in the league. It wasn’t new to him. He’s put up some decent numbers (in past seasons),” Woodson said. “But I think his comfort zone is having Kenny around him. Kenny is a magician, man.

“Kenny has a way of getting in guys’ heads. I have no idea what he said to Julius but the fact that he coached Julius in college, he had a relationship (with him) and he worked with Julius, I think Julius bought in at a high level in terms of what Thibs was preaching. And whatever Kenny was selling, it’s been pretty damn good all across the board.”

Payne was at Kentucky for 10 seasons when UK had 295 wins and won the 2012 national championship. Kentucky also made four Final Four appearances and won five SEC regular-season championships and five SEC Tournament titles.