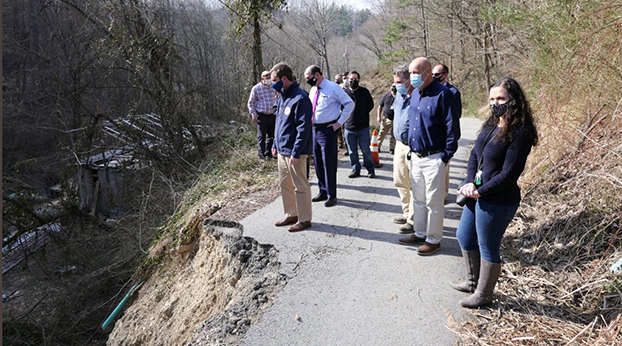 FRANKFORT, Ky. (KT) – Gov. Andy Beshear submitted a request to President Joe Biden Wednesday asking that a major disaster declaration be issued for some of the worst flooding in Kentucky history after unprecedented rainfall led to flash flooding, mudslides, and landslides across the state.

Between Feb. 26 and March 1, Kentucky experienced more than seven inches of rain in four south-central and southeast Kentucky counties, which resulted in flooding on the Green, Kentucky, Licking, Ohio, Red, and Mississippi rivers.

“This flooding was some of the worst in my lifetime,” said Gov. Beshear, “damaging about 2,000 homes and destroying infrastructure, including some of our roadways. We are asking the President to declare a disaster, to provide both individual and public assistance that is needed to help our people and our communities rebuild. This flooding, just days after harsh winter storms left tens of thousands without power, was the latest in a line of devastating setbacks, but our people are strong, we are resilient, and we will build back.”

The Federal Emergency Management Agency, or FEMA, has conducted joint damage assessments and validated more than 2,000 impacted homes in the counties of Breathitt, Clay, Estill, Floyd, Johnson, Lee, Magoffin, Martin, and Powell. The Governor is requesting these counties receive Individuals and Households Assistance from FEMA.

“The recent flooding event brought yet another severe impact to families and communities across the Commonwealth, and more specifically to our residents in nine eastern counties already damaged from the February ice storm event,” said Michael Dossett, director of Kentucky Emergency Management. “The Governor’s request for an award of individual and public assistance from the federal government highlights the urgency and extreme need for support in restoring the damaged and destroyed homes in our flooded neighborhoods and repairing the infrastructure damage suffered in this record flooding event.”

More than 44 counties have reported more than 1,200 instances of damage to infrastructure, debris removal, and emergency measures totaling over $49 million.

As of March 30, FEMA has verified in excess of $30 million in Public Assistance damages. The state threshold for requesting a declaration is $6.7 million.

Gov. Beshear and Senior Advisor Rocky Adkins viewed flood damage, met with local leaders, and talked to those affected by the historic storms when they surveyed the damage in Lee and Breathitt counties on March 5 and traveled to Hazard on March 10.

The governor issued a State of Emergency Order on Feb. 28, while 48 counties and 31 cities also declared local states of emergency. Of the 48 counties declaring a state of emergency for this flooding, 26 were also severely impacted by the February ice storm for which President Biden issued a Major Disaster Declaration on March 31.

The governor activated the Kentucky National Guard, which had soldiers assist in five counties, and worked with partners to deliver 45,000 gallons of water and more than 53,000 meals to Kentuckians in need.