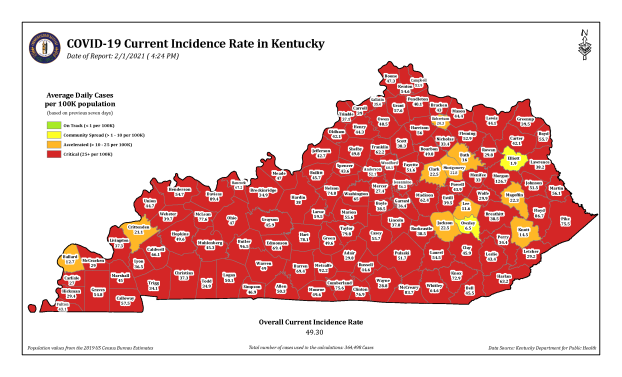 As the first month of 2021 came to a close, January was recorded at the second-highest month for COVID-19 cases in Harlan County at 627, just 50 shy of December’s total of 677.

Judge-Executive Dan Mosley said 58 percent of Harlan County’s total cases since the start of the pandemic have occurred between December 2020 and January 2021 alone, noting 98 cases last month were individuals 18 and under.

The county’s total cases currently stand at 2,231 and a death total of 61, making the mortality rate 2.73 percent. This is the ninth highest mortality rate in Kentucky.

There are at least 175 active cases currently in Harlan County.

Approximately 1,400 Harlan Countians have recovered from the virus. Mosley said the number of recoveries are difficult to calculate due to incomplete follow-ups at this time.

“Just because a case is outside of their quarantine period, doesn’t mean they have recovered from the virus. We are hopeful as case counts come down, more follow-ups can be conducted on the nearly 700 cases we had in December, and more than 600 in January to determine if they have recovered or are still battling the effects of this virus. Some cases from November are also still struggling with this virus and a few even remain hospitalized,” he said.

Mosley said 413,300 vaccines have been administered across Kentucky, up 104,488 vaccines administered since Monday of last week. This includes those allocated for and administered in long-term care facilities. This total encompasses first and second doses.

“The state continues to operate in Phase 1B of the vaccine plan, which includes people who are 70+ years old, first responders and K-12 school personnel,” he said. “Those scheduled to receive second doses of the vaccine during the next two weeks will still receive those on the day scheduled by the facility that administered your initial dose.”

Mosley said limited quantities of the vaccine is still an issue like it has been the last several weeks. The federal government allocated around 56,000 vaccines to Kentucky this week, up slightly from last week.

“We must all be patient with this process. I assure you that our healthcare providers are getting vaccines in people’s arms as fast as they’re received. Right now we have more vaccinators than we have vaccines. We have plenty of room in our community for capacity of vaccines and many providers who can administer these, we just need the vaccines.

“I am still not in favor of the state plan to move into regional vaccine centers at this time. The quantities of vaccines are not high enough to do this and  I fear will only pull vaccines from the health departments and hospitals doing it the right way right now,” he said.

As of Friday, approximately 2,170 does of the vaccine have been administered by Harlan ARH, the Harlan County Health Department or other contracted pharmacies assigned to service long-term care facilities and assisted living facilities.

More than 1,780 does have been first does and nearly 375 have been the second round doses.

FRANKFORT – During its Jan. 19 virtual meeting, members of the Kentucky Department of Education (KDE)’s School Curriculum, Assessment and... read more