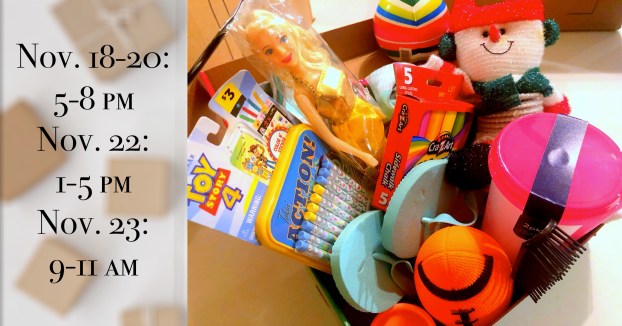 Packing shoeboxes like these is something Linda Mefford, a member of Verda Baptist Church, has been doing for years, helping impoverished children while spreading the word of God. (Photo by Emily Sargent)

The Samaritan’s Purse project, Operation Christmas Child, began Monday with volunteers across America setting up drop-off locations at local churches to collect donations for children all around the world until Nov. 23.

With more than 4,000 locations across the U.S., Verda Baptist Church member Linda Mefford said Operation Christmas Child has continued to pack and deliver shoeboxes filled with school supplies, toys and hygiene necessities since 1993.

Partnering with local churches like Verda Baptist Church and Lynch Church of God, Operation Christmas Child’s goal is to give to children in need while also sharing the message of Jesus Christ through each and every shoebox.

Mefford said this year’s goal is to reach 11 million donated shoeboxes, noting there is still time for those wishing to do so with a curbside drop-off open at both locations.

“They can drop off curbside, so they don’t even have to get out of their car. In fact, they offer a form online where they can fill out their papers and not have to get out and do that,” she said. “We will also unloading everything for them.”

Mefford said everyone helping to organize the event will be following CDC guidelines and other safety protocols, such as face mask usage and social distancing, during the drop-off hours below:

“We appreciate everyone who has supported us over the years, especially our church and pastor. Everyone is very involved, and we encourage everyone to continue building their shoeboxes and bring them to our drop-off center here at Verda Baptist Church or Lynch Church of God,” she said.

Working year round, Mefford said collection week is the highlight of each year when volunteers oragnize the shoeboxes and get them ready to be shipped.

“It’s a blessing from the Lord, and what we hope is that it touches a child somewhere. Of all the boxes we’ve built and sent, we hope that a child has accepted Christ through this ministry, so that’s a whole goal and purpose of it all,” she said.

Several children have also written back after receiving their boxes, filling the hearts of each volunteer, including a boy who couldn’t have continued his education without the help of the school supplies packaged neatly into the one he was handed.

“I particularly remember one child who received a shoebox that was stuffed full of school supplies. They weren’t able to go on to school because they didn’t have any school supplies at home, but that box helped him and he became a doctor,” Mefford said. “He said he felt like that box helped him and was a turning point for him that his education got to continue. So, things like this means the Lord is touching each box to me. The main thing that goes into a shoebox is prayer that it gets to the right child and that child is blessed from the experience.”

Since 1993, Operation Christmas Child has successfully collected and delivered more than 178 million gift-filled shoeboxes to children living in more than 160 countries and territories.

For more information on how to organize a shoebox for a little girl or boy in need, find the step-by-step guide on www.samaritanspurse.org/occ.