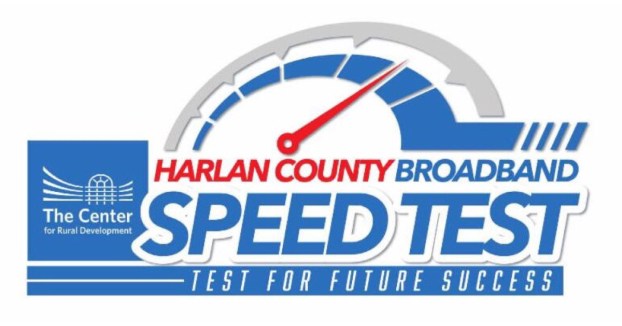 In a five-county area, which includes Harlan County, Surber said to those attending the Zoom meeting that a feasibility study coupled with the speed test recently conducted opened up a number of accomplishments to be made in southeastern Kentucky.

Surber said one accomplishment The Center hopes to achieve is a plan to advance broadband throughout Harlan County.

Surber explained to those in attendance that the FCC is able to claim the southeastern Kentucky region is serviced with broadband access, even though it may not truly be, by having internet providers report having at least one customer.

By offsetting the FCC’s data, Surber said The Center’s main goal is to help make grant opportunities available to counties like Harlan, where grants have been unavailable because of inaccurate data, and to help further develop broadband reliability.

“On top of that, if a company or provider reports data is available, that may be completely true, but the facts of the matter is it may be a very slow connection and at a very high cost,” he said. “If this pandemic has done nothing else, it has revealed in a lot of areas the lack of access people have had to good, quality high-speed broadband to be able to do homework, to access medicine, whatever the case may be.”

Surber said there are numerous, local service providers throughout the region and in Harlan County that are doing a “really good job,” and with grant money, could do an even better job at promoting broadband internet throughout the area.

Although he wasn’t at liberty to disclose too much information, Surber said there is a possibility that the speed test performed in Harlan County will be introduced statewide.

“The overall reason to do it is to paint an accurate picture and to begin laying groundwork to be able to see broadband advance in eastern Kentucky, specifically in Harlan County,” he said. “All we have right now is just raw data. We’re working with the company that helped us perform the speed test to put all of that together that is able to be shared with people. The data we have right now would be meaningless on a lot of levels.”

Surber said the results of the speed study will be combined and released to the public in the coming weeks.

For more information on the speed test conducted in Harlan County, visit The Center’s website at www.centertech.com.

With the help of a CARES Act Business and Industry loan guarantee to industries in Harlan County, over 100 jobs... read more