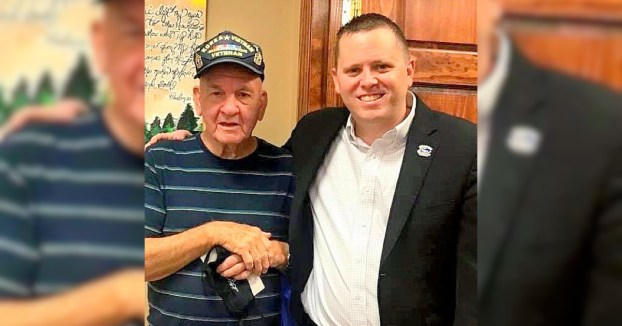 Judge-Executive Dan Mosley and Charles A. Saylor, Jr., a Harlan Countian who recovered from COVID-19, removed their masks briefly for a photo recently at the Harlan County Courthouse, where Saylor visited after months of staying home and protecting his health. (Photo submitted)

As the number of coronavirus cases continues to plateau in Harlan County, locals are beginning to stir again with the changing of the seasons.

Judge-Executive Dan Mosley also recently had a visitor to his office who he had not seen in months because of the pandemic.

“Charles A. Saylor, Jr., is one of my favorite people in the world. He’s a joy to be around and we all become even more knowledgeable just by talking to him,” Mosley said. “I love to hear his stories. He served our country in the Korean and Vietnam Wars. He also served Harlan County as the mayor of Wallins years ago. He’s a great friend who will be 87 years young on his next birthday.”

Mosley said Saylor found out he contracted COVID-19 a couple of months ago and was hospitalized with serious symptoms.

If it weren’t for God, Saylor said, he wouldn’t have been able to make it through the tough illness.

“He climbed all the stairwells in this building to come by and see us for the first time in months. He told me this, and I quote him, ‘I didn’t beat that virus. Jesus Christ beat it for me,’” Mosley said. “I’m certainly thankful Charles A. recovered from this virus that has taken far too many folks, that he is doing better, and it made my day that he was able to come by and see us today.”

Mosley said Saylor’s story reminds him that the power of faith and prayer is most important to the county, state and country now than ever, and to model a walk taking place across America, a Harlan County prayer march will be held this Saturday from noon to 2 p.m. beginning at the Harlan Center.

“The event is being organized by Leann Turner and several others. The walk will be 1.8 miles in length. All COVID-19 protocols will be followed. Visit Harlan County Prayer March 2020 on Facebook for more information,” he said.

On Monday, Mosley reported three new COVID-19 cases, bringing the county’s total to 417. Two of the new cases reside in the same household.

There are currently 29 active cases, five cases that are hospitalized, 11 deaths and 377 individuals who have recovered.

Mosley said 23.7 percent of the county’s population has been tested since the pandemic began. The positivity rate in Harlan County has dropped over the last week and now stands at 3.9 percent.

“This does not include tests that were negative on residents of Harlan County who were tested out of county and out of state. Experts say these numbers of positive cases don’t give the whole picture because many cases, including mild or asymptomatic infections, have not been diagnosed,” he said.

If you were a close contact of a positive case, the Harlan County Health Department will reach out to you over the phone.

“Let’s keep taking all of these precautions to make sure that things are as safe as possible so that our children, teachers, and school staff can return to in person learning in the safest environment possible, one week from today.”

Many Harlan County citizens may have little to no access to reliable and affordable internet. Harlan County is participating in... read more