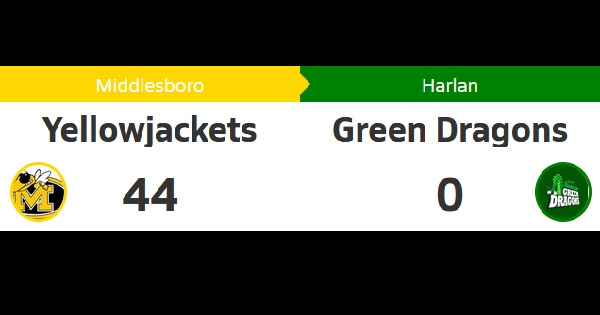 The Harlan Green Dragons opened the football season on Friday at Joe Gilley Sports Complex against one of the best teams on their 2020 schedule.

Two fumbles and a pair of bad snaps on punts were too much for the Dragons as Middlesboro claimed a 44-0 victory.

Isiah Hall, a senior center for the Dragons, suffered a game-ending injury.

The Yellowjackets opened the scoring with the first play of the game, as senior running back Caleb Bogonko went 65 yards on a sweep for a touchdown. Eric Helton added the two-point conversion.

A Harlan fumble, recovered by Jay West, gave the Jackets the ball on the Harlan 38 with 10:53 left in the first quarter.

The Green Dragons had their best possession of the night but failed on downs on the Middlesboro 23 with four minutes remaining in the opening period.

The Yellowjackets added their third touchdown with 5:53 left in the first half as Grigsby, a freshman quarterback, scored on a three-yard run. He added the two-point conversion.

Another Harlan fumble, recovered by Middlesboro’s Craig Brock, helped set up another score just before halftime. Four plays later, Riley Gent went in from the 19. Helton’s two-point conversion pushed the lead to 30-0 at the break.

The Yellowjackets added a score with 5:15 left in the third quarter as Bogonko scored his third touchdown of the game on a 23-yard run. He added the two-point conversion.

With a running clock, Middlesboro found the end zone once more with eight minutes to play. Junior running back Tyler Kelly went in for a 12-yard touchdown. The extra points were blocked by the Dragons.

Bogonko led the Jackets with 150 yards on seven carries, with Gent adding 55 yards while Grigsby finished with 50.

Harlan senior running back Ethan Clem led the Dragons with 54 yards on 12 carries. Senior quarterback Connor Scearse added 21 yards on seven carries. Harlan was held to 66 yards on the ground.

By John Henson Contributing writer Putting the 2019 season behind him has helped drive Harlan quarterback Connor Scearse as he... read more