Calipari happy to see Sutton inducted into Hall of Fame 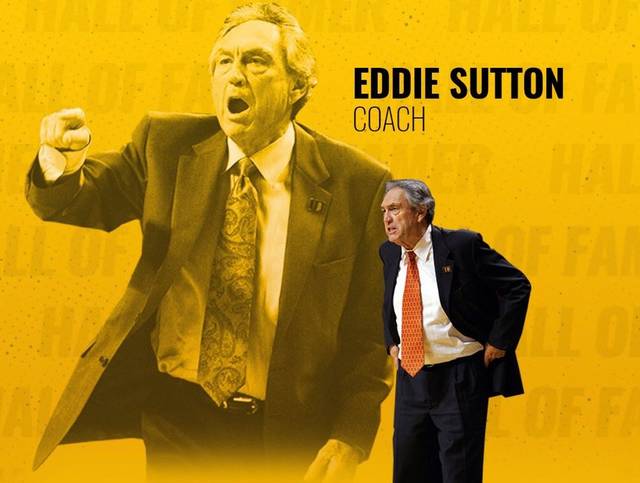 LEXINGTON, Ky. (KT) — John Calipari hasn’t forgotten his mentors and one of them received a prestigious honor Saturday.

The Kentucky coach praised one of his predecessors at Kentucky, former Wildcats’ coach Eddie Sutton, who will be inducted into the Naismith Memorial Basketball Hall of Fame. The enshrinement ceremony is scheduled for Aug. 29.

“Coach Sutton was always very kind to me as a young coach and I’ll never forget that,” Calipari tweeted Saturday. “I’m so happy for him and his family on this well-deserved honor.”

Sutton’s Oklahoma State squad defeated Massachusetts 68-54 to earn a berth in the Final Four in 1985 and Calipari recalled coaching against Sutton that season.

“I walked away impressed at how hard his team played,” Calipari said. “I always had great respect for the job he did coaching and learned so much from watching his teams play.”

Sean Sutton, who replaced his father at Oklahoma State and played for his father at Kentucky, said Saturday was a “very special and exciting day for our family.”

“My dad was so honored, and humbled, earlier today to receive the phone call from the Naismith Hall of Fame that he was going to be inducted in the 2020 class,” Sean said. “My dad loved teaching the game of basketball. He had so much respect for the tradition of the game and he loved the relationships he built with his players. And he’d be the first to tell you so much of the success of his career was due to the outstanding players he coached, and the great assistant coaches he had on his staff.

“The only thing that would make this more special today is if my mother, the rock of our family, the love of his life for 54 years, would have been here to see it. But I know she’s smiling above and so proud of his accomplishment.”

Sutton, who turned 84 on March 12, relieved Joe B. Hall at Kentucky in 1995 and resigned fur years later following a recruiting scandal. Sutton compiled an 88-39 mark at Kentucky, including a 32-4 record in his first season with the Wildcats.

Following a year away from coaching, Sutton replaced former Kentucky assistant coach Leonard Hamilton at Oklahoma State, his alma mater. Sutton led the Cowboys for 16 seasons and guided Oklahoma State to the Final Four twice. He went 368-151 and finished out his coaching career as an interim coach at San Francisco, where he notched his 800th victory during the 2007-08 season.

Overall, Sutton went 806-326 in 37 seasons and began his career at Creighton before moving on to Arkansas where he guided the Razorbacks to the Final Four in 1978. The basketball court is named in his honor at Oklahoma State and the practice facility at Arkansas also is named after the long-time collegiate coach.

Rick Pitino listed Sutton as one of the coaches who should “have already been in” on his Twitter account. He also mentioned Bob Huggins, Billy Donovan and Jay Wright. Pitino succeeded Sutton at Kentucky and guided the Wildcats to the NCAA championship in 1996.

“Congrats to a great coach, Eddie Sutton, on his HOF honor,” Pitino said.