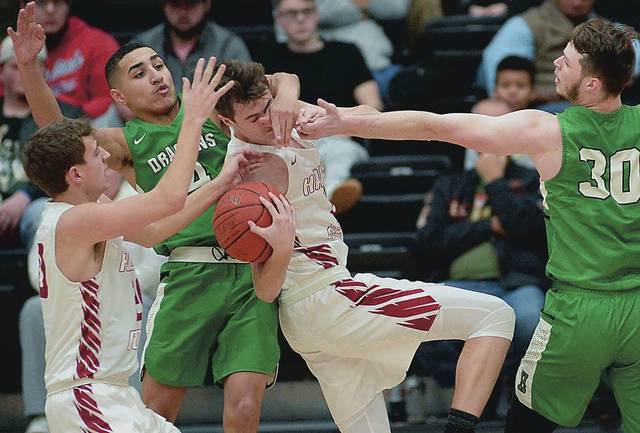 Nothing is going to be easy this season in the 52nd District, a point that Harlan County coach Michael Jones stressed in the preseason and his Bears have demonstrated in three hard-fought district wins, including a 79-71 victory Saturday over visiting Harlan.

“This is as good a district as there is and anyone can win on a given night,” Jones said. “We’ve been fortunate enough to win the first three, but we have to keep working. I think if we can correct some minor things I think we can be a lot better.”

Harlan County (12-5 overall, 3-0 district) was very good in the first half in building a 17-point halftime lead as Taylor Spurlock, Trent Noah and Tyler Cole found success by working into the lane for good shots while opening up the outside. The Bears hit 11 of 16 shots in a 29-point second quarter that also featured 3-pointers from Noah, Cole, Jackson Huff and Jacob Wilson.

“We were real aggressive in the first half and did some things well defensively. We did a good job attacking off the dribble and knocked down some shots,” Jones said. “Then, for whatever reason, we went away from the things that got us the lead. There are a little things we have to correct.”

Harlan (8-8 overall, 1-2 district), coming off its first All “A” Classic regional title in 18 years, showed quite a bit of grit in the second half by battling back behind guards Jaeden Gist and Jordan Akal. Gist found success slicing through the HCHS defense or scoring off putbacks while Akal did damage from both inside and outside to get the Dragons as close as two in the final minutes.

“I thought everything went wrong for us in the second quarter, plus they shot well,” Harlan coach Derrick Akal said. “I’m proud of my guys. There are times a 17-point game could have turned to 30 or 40, but the way they fought back into the game was impressive with three guys who have never been in this position. I like where we’re going. They could have folded and made some excuses, but they didn’t. I thought Jaeden (Gist) played an excellent game getting to the bucket, and Jon (Eldridge) played well.

“When you are in the bottom half of the top 10 and go on the road against one of the top four or five teams and compete like this you have to be proud of your team. I told them not to worry about this particular game but keep getting better.”

Spurlock scored 25 to lead the Bears, while Noah and Cole added 23 and 20, respectively.

“They are as athletic as any team we’ve played, except for probably Henry Clay and Lafayette,” Jones said. “We were supposed to be doing some things with Gist in the middle, but when we didn’t do it he was catching it and going by us. Our guys have to do a better job of honing in on what we talk about in the huddle or at halftime and taking it out on the floor.”

Harlan found more success on the defensive end in the second half after going away from a 2-3 zone back to a man-to-man.

“We just wanted to change it up. The last couple of games we’ve played more 2-3 than normal,” Akal said. “We’ve hard tired legs with this being our fifth game in seven days. It’s hard to come in here and get a W, but I thought we got our energy back from last week in the second half. We gave up 29 points in the second quarter, and you can’t beat a team like them doing that.”

Harlan opened the second half with an 11-2 run to get within eight before Noah and Cole restored order for the Bears and pushed the lead back to 11, at 62-51, going into the fourth quarter.

Five straight points by Akal in a 7-0 run cut the deficit to 64-61 with 4:31 to play. After a Spurlock basket, Johann Gist rattled in a 3 from the corner to make it a two-point game with 3:50 left. HCHS pushed the lead back to six behind Cole and Spurlock, but a 3 by Kaleb McLendon cut the lead to two again with 1:35 left. Jackson Huff scored off the glass against the Harlan press, then Spurlock added two free throws after a Harlan miss. Spurlock and Noah put the game away at the line with two free throws each in the final 32 seconds.

Harlan plays host to South Laurel on Monday. Harlan County will be at home on Tuesday against Bell County in a district girls/boys doubleheader.