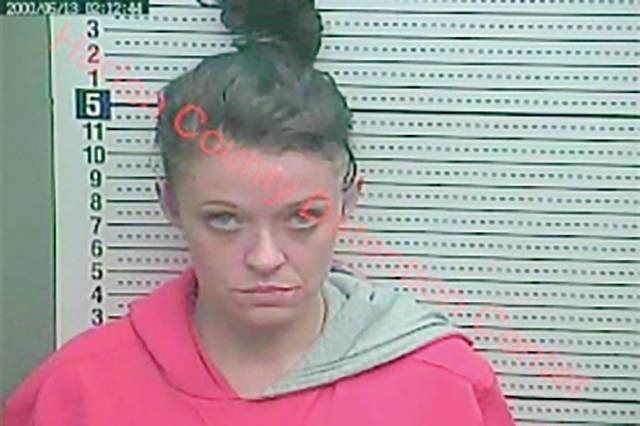 A woman from Knox County was recently arrested after an officer was dispatched to investigate a car stopped in the middle of the road.

According to the citation, HPD received a complaint from Kentucky State Police, Post 10, advising officers of a vehicle whose driver was possibly under the influence. KSP also advised the vehicle was observed stopped in the roadway for no apparent reason and the occupants appeared to be arguing.

Harris allegedly told the officer she did not have her identification, but that her name was Karen Harris with a birth date of Oct. 17, 1978. Young later confirmed through a NCIC check that her real name was Joanna and she had an active warrant for her arrest in Knox County.

She was charged with first-degree possession of controlled substance (methamphetamine), third-degree possession of controlled substance (drug unspecified), tampering with physical evidence, failure to appear, giving an officer false identifying information and identity theft. She was lodged in the Harlan County Detention Center on two full-cash bonds totaling $30,000, both with 10 percent bail credit.

• Frankie Bright, 57, of Roseville, Michigan, was arrested by Kentucky State Police troopers on Jan. 12. He was charged with failure to wear seat belts, no registration plates, no registration receipt, failure of non-owner operator to maintain required insurance, failure to produce insurance card, registration and title requirements for vehicle not operational on highway, operation of motor vehicle while under the influence of drugs/alcohol, first-degree possession of controlled substance (methamphetamine) and possession of drug paraphernalia. He was lodged in the Harlan County Detention Center on a $2,500 full-cash bond;

• Cari Saylor, 32, of Wallins, was arrested by Kentucky State Police troopers on Jan. 14. She was charged with unlawful transaction with a minor (controlled substance; under 16 years of age). She was lodged in the Harlan County Detention Center on a $5,000 full-cash bond;

• Tyler Middleton, 25, of Baxter, was arrested by Harlan County Detention Center officers on Jan. 14. He was charged as a persistent felony offender II with first-degree trafficking controlled substance (more than 2 grams methamphetamine), public intoxication of controlled substance (excluding alcohol), possession of drug paraphernalia, first-degree burglary, theft by unlawful taking (firearm) and carrying a concealed weapon. He was lodged in the Harlan County Detention Center on a $3,500 full-cash bond.