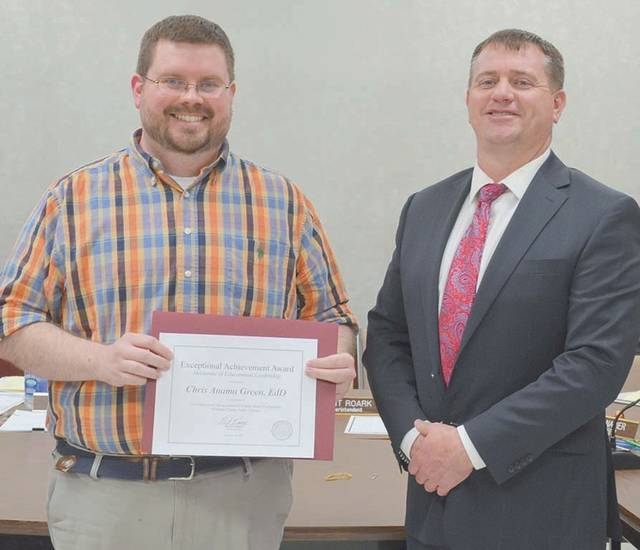 Claude Christopher Anama-Green, a Spanish teacher at Harlan County High School, posed for a picture with Harlan County Superintendent Brent Roark after being honored during a board meeting Thursday night for receiving his doctorate in education along with various other certifications.

A Harlan County High School teacher was honored during a Harlan County Board of Education meeting Thursday night for not only his dedication to the classroom but his willingness to expand on his own education in order to be the best teacher he can for his students.

Claude Christopher Anama-Green, a Spanish teacher at HCHS, recently graduated from the University of the Cumberlands in December with his Doctor of Education degree in educational leadership, with a focus on curriculum and instruction, which makes him one of the most educationally distinct teachers in the district.

“I learned he obtained his doctorate and I thought it was pretty awesome,” said Harlan County Superintendent Brent Roark. “I wanted to recognize his accomplishments and introduce him to the board of education during our meeting.”

Roark said he and the board are “super proud” of Green for obtaining the level of education he has, adding it “is good for you, our students and our district.”

Roark also commented on the extensive resume Green has compiled over the years, including multiple certifications.

“It gives us more opportunity to utilize him in so many different ways,” he said. “ Most of our folks have certification in one are. Some have an incredibly limited certification. Some are so narrowed down to where they can only teach one of two grades or one or two classes.”

Roark said he appreciated Green’s dedication and drive to pursue such an education and that he is proud to have him as an educator in the Harlan County School District.

He also studied Spanish at a variety of universities and intensive language institutes in Barcelona, Spain; Granada, Spain; Guanajuato, Mexico; and Cabrete, Dominican Republic, going out of his way to visit other countries in order to further his education and ability to speak Spanish fluently.

He is in the process of adding administrative certifications from the University of the Cumberlands. Green presently holds active Kentucky teaching certifications in Spanish (P-12), Biology (8-12), Middle Grades Science (5-9), Middle Grades Mathematics (5-9), English/Language Arts (8-12 and 5-9), English as a Second Language (P-12) and recently passed the Social Studies PRAXIS for grades 8-12.

Prior to coming to Harlan County, Green taught Spanish for one year in the Jenkins Independent School District, was an adjunct undergraduate instructor in environmental health sciences at East Tennessee State University, was an Upward Bound instructor of environmental science at East Tennessee State University and managed multi-million dollar grants at the Pitt County Public Health Department in Greenville, North Carolina.

Green first taught Spanish and English as a Second Language (ESL) as a beginning Spanish drill instructor and ESL teacher/tutor while still an undergraduate student at Emory & Henry College.

During the summer of 2018, he had the privilege of teaching science for the Upward Bound program at Southeast Community and Technical College.