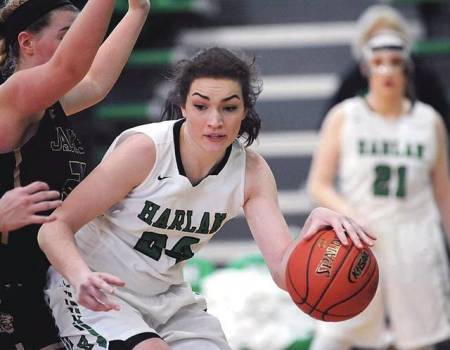 From 27-win seasons in 2016 and 2017 that ended with 13th Region Tournament titles, the Harlan Lady Dragons went through the letdown that usually comes with success, especially for Class A schools with limited numbers.

Harlan dropped to 16-16 in 2018 after losing all-state guard Jordan Brock to Tennessee Tech. With four other starters graduating the next year, Harlan fell to 8-22 in 2019.

Whether the Lady Dragons reached bottom last spring will soon be determined as three starters are back for Tiffany Hamm’s third season as head coach.

Effort was never a problem for the Lady Dragons during last year’s rebuilding campaign and Hamm expects that hard work to pay off once again on the defensive end.

“I feel defense should be a strength for us. We have a lot of kids who move well and can fly around,” Hamm said. “I think they have bought into what we are trying to do defensively that will help create some offense.

“Our offense isn’t as far along as our defense, but that is probably pretty common for many teams at this point.”

Natalee King (15 points per game, 9.3 rebounds per game last season) is the last link to Harlan’s regional championship teams and is the only senior on this year’s squad. King, at 5-10, can play numerous positions and is one of the region’s top all-around players with her ability to block shots and rebound.

“She is so versatile. She is good at all aspects of the game. She is a good rebounder, can push it in transition and is a pretty good shooter,” Hamm said. “She gets a lot of blocks and steals. I know we were down last year, but I thought she was the best player on the floor a lot of times last season.”

“She is our best on-ball defender. She is very good on that end of the floor with her ability to help others in addition to the person she’s guarding,” Hamm said. “She just needs to keep working on the offensive side. She loves to foul, but we need her on the floor. She has to be more disciplined.”

Ella Karst (5.1, 3.3), an eighth-grader who started last year on a wing, will likely take over for Payeton Charles at point guard. Charles led the Lady Dragons last season, averaging just under 16 points a game while handling the bulk of the ball-handling duties.

“She played all last season as a 12-year-old seventh-grader, but her maturity level is above her age. Ella handles tough situations well,” Hamm said. “She was very productive for us and handled everything as well as you could hope. She is one of our better shooters and better ball-handlers.”

“She is very quick with active hands. She gets after it defensively and can push the ball on offense,” Hamm said. “She is pretty strong for her size.”

“She is a very good shooter who can attack the basket,” Hamm said. “She has improved her ball-handling. I thought that was a weakness for her in the past, but she is doing a better job of making decisions this season.”

Kaylee Leslie (1.4, 3.1), a 5-9 junior, is the probable starter at center if she can work her way back from an ankle injury that has kept her sidelined through much of the preseason.

“Ideally, she will be our center. She just has to stay healthy,” Hamm said. “If we can keep her on the floor, she can help us. She is our biggest player with some back-to-the basket ability.”

“Peighton is a little undersized at forward, but she is super smart. She is usually in the right place at the right time,” Hamm said. “Aymanni is a lot like Natalee with guard and post skills. She has size and strength but can shoot the ball from the outside. She is very well rounded and will continue to get better. She could play two through five.”

With depth still a concern, Hamm would like to see the Lady Dragons avoid the foul problems that cost them in several close games last season.

“Being disciplined defensively is a key for us to keep us out of foul trouble,” Hamm said. “We need to do our jobs defensively to make our defense as a whole work better.

“Offensively, we’ll rely on Natalee and Ella and Angel a lot, but I hope some other kids can gain some confidence.”

Winning the 13th Region All “A” Classic is always a goal for the Lady Dragons, especially with no clear-cut favorites this season.

“I feel Pineville and Middlesboro should have pretty good All ‘A’ teams, and of course Williamsburg is still a contender, but I think it’s open,” said Hamm, who also expects a competitive 52nd District with HCHS also rebuilding after three straight titles. “I think the district will be pretty competitive every night.”

While the Lady Dragons still have plenty of room for improvement, Hamm knows the first step is continuing to play hard.

“Our effort is great. The kids have good enthusiasm,” she said. “Our individual skills and skill development haven’t matched that effort. That’s something we’ve really tried to improve upon. I think once our skill level matches up with our effort we’ll be more successful. We’re still in the growth process now of getting our skills where they need to be.”