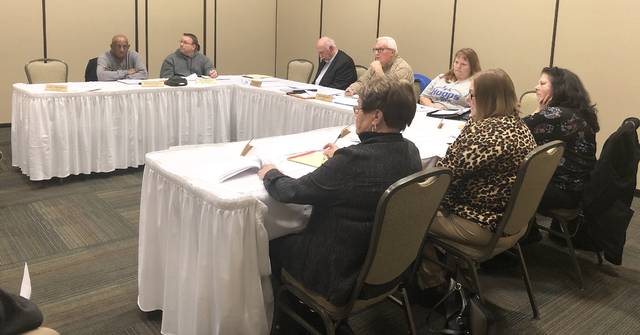 Harlan City Council members moved to schedule a special-called meeting for Nov. 21 at 6 p.m. to work on the city’s alcohol ordinance. Harlan Mayor Joseph Meadors invites those wishing to voice opinions to attend the meeting.

City of Harlan Mayor Joseph Meadors began discussing the next steps the Harlan City Council must take after city residents voted to “go wet” during the November General Election.

The council met Monday night as part of their regular monthly meetings, with an alcohol ordinance being a large discussion piece. City attorney and Assistant Commonwealth’s Attorney Jonathan Lee began gathering a plethora of information regarding the ordinance, looking to base much of the city’s ordinance on alcohol ordinances from Pineville and Corbin.

Lee said the money obtained from the packaged alcohol sales, a 5 percent profit for the city, would need to be placed into a distinct segregated account and the funds used specifically for law enforcement.

“Some other places that have been wet for years are upwards of 89 percent, but since we came in under this new law, we’re bound by the 5 percent,” Meadors said. “That means, a retail package at Smok’n Joes or Food City you buy at $20, we get five percent back, so the city of Harlan would get $1.”

Meadors explained the money cannot be used for new sidewalks or any of the like but is, in theory, only to be used for police department upgrades.

“I’d like to have this up and going by the first of the year. We could have it done by the middle of December, but I want it to be done right,” he said. “What I’d like to do is have a work session where we work on building this ordinance and nothing else.”

Meadors added the council members have a 60-day window to act on the ordinance and prepare for the packaged alcohol sales to being in stores within Harlan city limits.

After further discussion, council members scheduled a special-called meeting for Nov. 21 at 6 p.m. to work on the alcohol ordinance for the city of Harlan. Meadors invites those in the public wishing to attend and anyone else who would like to voice opinions.

The council also motioned to:

• Approve the minutes from the Oct. 14 regular scheduled meeting;

• Approve the bills and to pay them;

• Approve the first reading of a property annexation into city limits;