Maxey will take on bigger role as Richards recovers 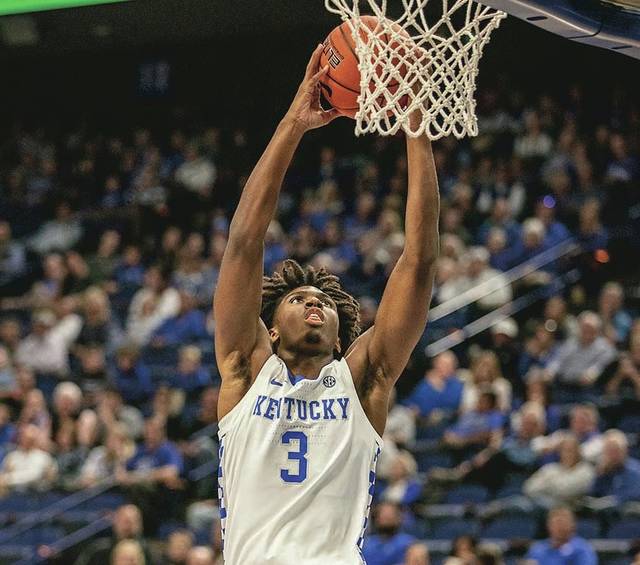 Tyrese Maxey went up for a dunk in Kentucky’s exhibition win over Georgetown College last Sunday at Rupp Arena.

As Kentucky inches closer to the season-opener against Michigan State set for Tuesday at Madison Square Garden in the State Farm Champions Classic, Maxey figures to play a bigger role as junior Nick Richards recovers from a foot injury he suffered in last Sunday night’s exhibition 80-53 win over Georgetown College.

Maxey played 25 minutes against the Tigers and finished with 14 points and added four rebounds, three assists and two steals. Like most of the guards who have come before him, Maxey is experiencing a learning curve.

“Tyrese is doing fine,” Kentucky coach John Calipari said. “I’m on him hard. It’s a different game when possessions matter more than ever in your entire life. And the reason possessions don’t matter as much as a high school player is because you’re going to have 30 of them one way or another whether you’re bad, good, indifferent. I’m the best player and I’m getting 30 looks.

“I’m getting 25 shots. Well now, every possession matters a little bit more. A pass to the wing with pressure on you matters more. The open jump shot, you’re not getting 25. You’re going to get eight, nine, 10. They matter more. So all that kind of stuff is one of those habits that we’ve got to teach these young kids.”

As Richards heals, Calipari likely will use a three-guard lineup, with Maxey, Hagans and Quickley in the backcourt.

“We could play three guards and be fine,” Calipari said. “I mean, Immanuel (Quickley), obviously Ashton (Hagans) and Tyrese (Maxey), I mean, you’ve got three (six-foot) three-ish kind of guards who have some toughness to them, so you can do it. The issue becomes shot blocking and how we are playing behind those three.”

“There will be things I’ll pick up (on defense),” Calipari said. “Most of it’s stopping on defense, not being able to come up with the rebound. Defensively, it’s not my man, so you’re not helping us like you have to.”

Brooks agreed with his coach and thought he played “decently” last weekend.

“(I’ve) still a lot of stuff I’ve got to work on ­— staying in front, ball handling and rebounding,” he said. “I didn’t have enough rebounds as I thought I should have, so there are some things I’ve got to clean up.”

Quickley is one of the veterans willing to help Brooks and the rest of the freshman class.

“I’ve just been trying to pass on what I’ve learned to guys like Keion (Brooks Jr.) and our other new guys,” Quickley said. “I try to help them in any way I can and I’m still learning everyday, too.

“I think they played pretty well today too, I’m sure a couple of them were a little nervous with this being their quote un-quote first game, but I think they’ll be even better next game and continue to get better throughout the season.”

The Wildcats played Georgetown College last weekend, followed by a second and final exhibition matchup against Kentucky State on Friday at Rupp Arena.

“Whoever we play we’re helping, the Kentucky coach said. “We’re helping that school. So part of what you’re doing is, who do you want to help? And with Georgetown and Kentucky State, two great programs with great histories, we have done other schools in state.”

In addition to exhibition games against state colleges, Calipari also has reached out beyond the Bluegrass and played other teams as well.

“We have also Clarion, where I went. I mean, Indiana Pennsylvania, who almost beat us. Was that last year?” He said. “That’s the greatest thing — it helps them. And I think that’s an important thing of what we do here and how we try to do it.”

Michigan State coach Tom Izzo opens the season as the nation’s top-ranked team and will put that ranking on the line against No. 2 Kentucky on Nov. 5 in the State Farm Champions Classic at Madison Square Garden.

(It’s) kind of an interesting opener, great opener to be honest with you,” he said earlier this week. “Great for us, great for college basketball.”

Kentucky defeated the Spartans 69-48 in the State Farm Champions Classic at Madison Square Garden two years ago and is 2-4 in the last six games against Izzo’s squad.

Immanuel Quickley credits his growth to his faith.

“I started putting God first more, daily devotion every single day, continue working hard, getting up in the morning and working out before class and things like that,” he said. “But really just putting God first was pretty much the breakthrough.”

That breakthrough has been noticeable on the court and Quickley could be part of a three-guard lineup with Ashton Hagans and newcomer Tyrese Maxey.

“With myself, Ashton (Hagans,) and Tyrese (Maxey), even though we’re all quote-un- quote, point guards, I don’t think that a label means how we play together because at the end of the day we’re all basketball players and we’re very versatile so you don’t lose anything, especially with Ashton and Tyrese, they’re really good on defense,” he said. “Ashton’s Defensive Player of the Year for the SEC and so we aren’t losing anything on the defensive end. On offense you have a lot more space.”

Nate Sestina’s parents have already switched their loyalties and most everyone else from his hometown of Emporium, Pennsylvania.

“I think everybody changed their Bucknell flags and their Bucknell T-shirts for Kentucky stuff,” I went and visited my parents at work when I went home in May and I had people asking for tickets to Madison Square Garden and Big Blue Madness and stuff like that. They are going to charter a bus to one of our home games this season. It’s really cool to see the support there.”

Sestina played four years at Bucknell before transferring to Kentucky as a graduate transfer last summer and will be counted on to give the Wildcats experience in the post. He scored 22 points in Kentucky’s Blue-White exhibition game last week at Rupp Arena.