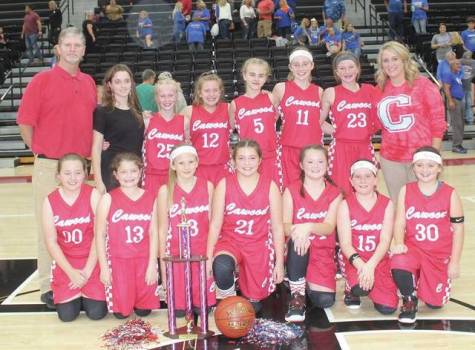 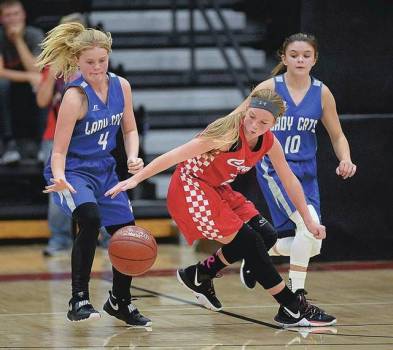 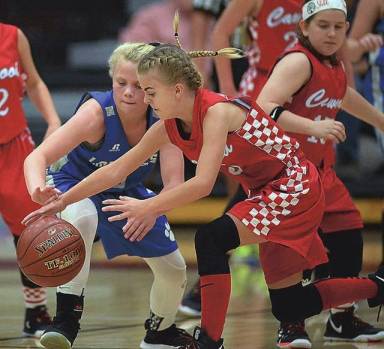 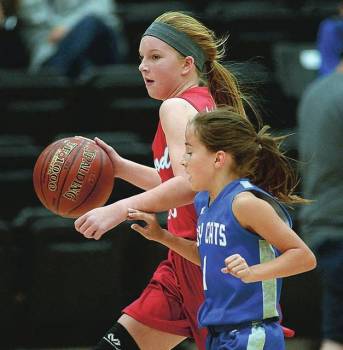 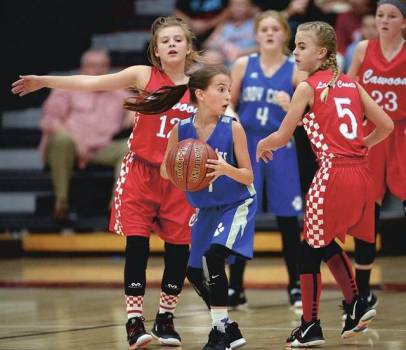 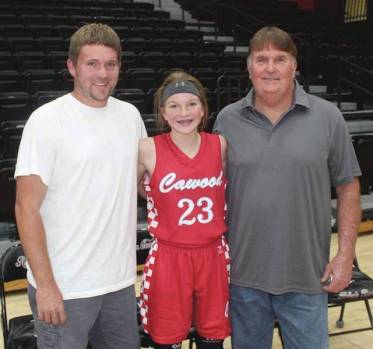 <p>John Henson | Harlan Enterprise</p> <p>Cheyanne Rhymer was pictured with her dad, Adam, and grandfather, Lynn, after she led Cawood to the fifth- and sixth-grade county championsip Thursday with a 37-point effort.</p>

Anyone who has followed Harlan County basketball history over the last half century will likely connect the name of this year’s star player in the county fifth- and sixth-grade league.

Cawood sixth-grade guard Cheyanne Rhymer continued her season-long domination as she scored all of her team’s points Thursday in a 37-26 victory over Rosspoint in the county championship game at Harlan County High School. The Lady Comets closed out a 19-0 season.

Rhymer, one of the county’s top players last season when Cawood finished second, is the daughter of former Cawood High School standout Adam Rhymer, a member of the school’s last team in 2008 before merger. Her grandfather, Lynn Rhymer, played on three 52nd District championship teams at Cawood before his graduation in 1979. Both Rhymers are members of the JACHS 1,000-point club and the only father-son combination on the list.

“Cheyanne is a special player, and I feel comfortable with the ball in her hands,” Cawood coach Teddy Stephens said. “We look for other kids and this is a team effort. Chey is a scorer, but it takes all five players to win. It took all five of us and a few extra to win tonight.

“I tell my kids that defense wins championships and I felt like Maddi Middleton, Skylar Phillips and Emily Stewart stepped up and carried us tonight.”

It was the sixth county championship for a team coached by Stephens and the fifth undefeated season.

“It’s a special season and a special group of girls. I’ve really enjoyed them,” Stephens said. “We’ll take a few weeks off and enjoy this and then get back in the gym with AAU and get ready for next year.”

Rosspoint played the Lady Comets closer than anyone had all season and was locked in a tie late in the third quarter. Rilieigh Duff scored 10 to lead the 14-6 Lady Cats. The Lady Cats’ upset bid was hurt by missing 16 of 21 at the free throw line.

Cawood took a 5-4 lead after one quarter as Rhymer hit one of two at the line in the closing seconds of the period. The lead changed hands seven times in the second quarter Aubree Hensley, Lindsey Skidmore and Sophie Day traded baskets with Rhymer. Day’s jumper pulled the Lady Cats even at 12 before Rhymer’s buzzer-beater put the Lady Comets up 14-12 at halftime.

“They packed it in a little bit and I thought we were a little nervous,” Stephens said. “We made some adjustments and did pretty well after we got in the flow of the game.”

Rosspoint stayed close as Skidmore hit a 3-pointer and Hensley added a free throw to tie the game at 18 with 3:18 left in the third quarter. Two baskets by Rhymer put Cawood up by four, then six more points by Rhymer to start the fourth quarter extended the lead to 10.

“Rhymer has been unreal for them all year and she’s as tough as I’ve seen at this level,” Rosspoint coach Johnny Simpson said. “I thought we played one of the best games we’ve played all year and stuck to the game plan as well as we could have, but just didn’t have enough gas left in the tank there at the end. Super proud of my group and look forward to seeing these girls continue to develop from both teams. The future of Harlan County girls basketball looks bright. Congratulations to coach Stephens and Cawood on a fantastic season.”

The county seventh- and eighth-grade tournament opens Saturday at James A. Cawood.

Wallins (6-9) pulled away down the stretch to claim third place with a 31-26 win over James A. Cawood.