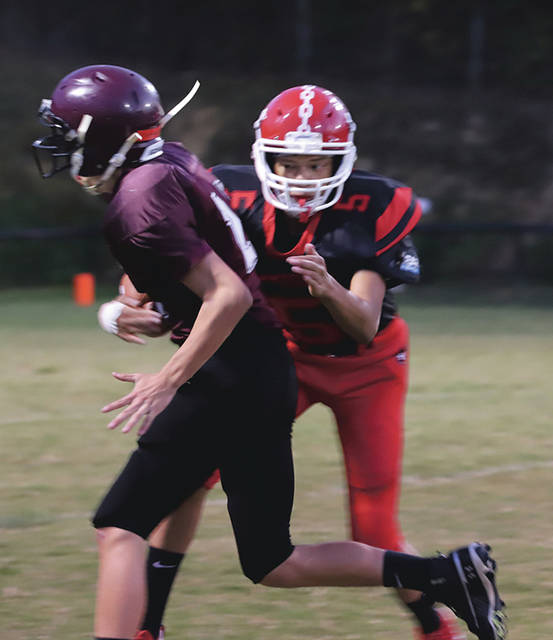 Cumberland’s Jonah Mumford tried to break free from a defender after a catch earlier this season. Mumford and the Redskins fell 36-26 on Saturday in playoff action.

Jake Brewer led the Patriots with 163 yards on the ground and 72 through the air. Jace Brown had 123 rushing yards and 72 receiving. Brewer ran for three touchdowns and passed for one. Brown added two touchdowns rushing and one receiving. Brayden Fultz and Raeden TIndell each added two-point conversions.

Sedrick Washington had touchdown runs of 47 and 2 yards for the Redskins. Washington also added a two-point conversion. Landon Huff had a fumble recovery.

New Harlan will play Letcher Central on Saturday at 3 p.m. in the conference championship game at Harlan County High School. Cumberland will play Evarts at 1 p.m. for third place.

New Harlan will play Letcher Central at 7 p.m. in the seventh- and eighth-grade championship game as Letcher held off Cumberland 36-26 on Saturday at Cumberland.

Carroll teamed with Cody Fields for a 25-yard pass to set up a touchdown run by Carroll.

A Dakota Keith fumble recovery preceded a 75-yard touchdown run by Anderson with 33 seconds left in the third quarter.

Carroll forced a fumble that Logan Childers recovered with 1:36 to play. Carroll then threw a screen pass to Darius Akal, who pitched the ball to Anderson for a 30-yard touchdown.

Cumberland will play Leslie County on Saturday at 5 p.m. in the third-place game. New Harlan received a bye as the conference’s top seed.