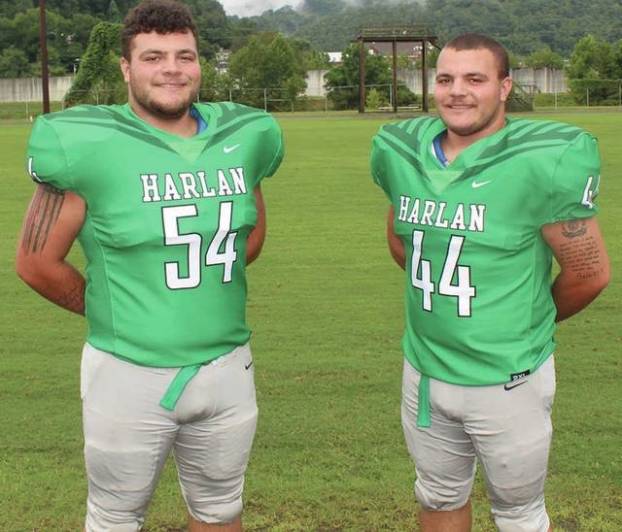 Jordan Howard (left) and Jacob Howard are back for their senior seasons with the Harlan Green Dragons and will be counted on to provide leadership and experience for a young team.

As football players since grade school and fire fighters through high school, Jordan Howard and Jacob Howard are accustomed to working together.

The two seniors will play key roles this season for the Harlan Green Dragons, who are in rebuilding mode after losing 13 of 22 starters from last year’s 4-7 squad. The Dragons have had a trying summer with low numbers that led to a forfeit of their opening game at Harlan County. The numbers are slowly rising and both Howards say the potential is there for a surprising season.

“I absolutely think we can surprise people in this county and around our district,” Jacob Howard said. “People think we aren’t going to be that good, but I see good talent and a good team forming up as the days go by.”

“I believe a lot of people will be shocked with what we’re going to do with only 23 players,” added Jordan Howard. “We’ll do a lot better than what people expect.”

Jordan Howard is the Dragons’ top lineman as a three-year starter.

“Jordan is probably the most gifted lineman I have,” first-year Harlan coach Eric Perry said. “He’s a big kid who moves really well and is extremely strong. A lot of kids rally behind him. I’m expecting big things from Jordan.”

“Speed is a big part of my game. You have to come off the ball 100 miles per hour,” Jordan Howard said. “That’s how I beat people on the line. They can’t beat up with me.”

Jacob Howard played running back and linebacker through junior high school and three years of high school, but moves to tight end and nose guard in Perry’s system.

“Jacob has made the transition very well. He has really taken to it,” Perry said.

“I think I need to play where coach Perry wants me, running the ball, catching the ball of blocking,” Jacob said. “It’s a big change, but I think we’ll be all right.”

Jacob Howard suffered a broken left fibula and torn ligaments in an injury at midseason last year. He’s worked his way back in the off-season and is looking forward to a healthy senior year.

“I’m real excited for this season. I think we can show our district what we’re about this year. I think we have potential and the players have built a bond,” Jacob Howard said.

When the Howard brothers aren’t playing football, they spend time volunteering with both the Yocum Creek and Evarts fire departments

“We saw a brush fire about four years ago and we just wanted to help,” Jacob said. “We always want to protect the community and be there for people who need us.”

“We like to be there for people in the worst times of their lives,” Jordan said. “We’re out no matter what time, even if it’s 3 in the morning. We’ve had to come home and take showers and go straight to school.”

After playing together since middle school at Evarts, the Howards know changes are coming soon.

“It’s been an honor to play together,” Jacob said. “If we play for different teams in college it will be hard on us because we’ve always been there together all the way back to Evarts.”

The Dragons will open their regular season schedule at home on Aug. 30 against Berea.

The Harlan Lady Green Dragons’ seventh and eighth grade team traveled to Middlesboro on Wednesday to take on the Middlesboro... read more