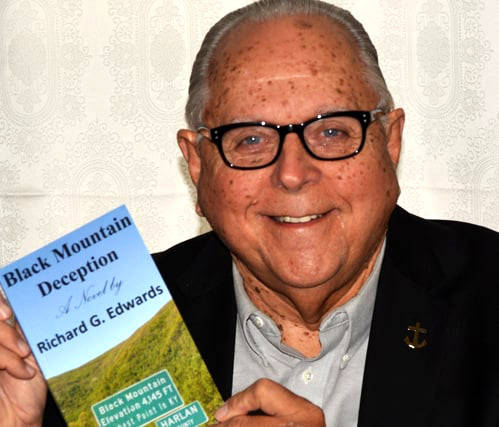 Dr. Richard G. “Dick” Edwards will be at Jewelcraft, 115 Village Center Mall in Harlan, from 10:30 a.m. till 2 p.m. on Aug. 6 to greet friends and sell and sign copies of his new book entitled Black Mountain Deception. The book is his 8th novel, all of which are based in Harlan County and are available at Jewelcraft.

Dick commented about the book, “I feel certain those that have read and enjoyed any of my previous books will like this one, as will new readers. In it a huge new antenna is under construction atop Black Mountain, the highest point in Kentucky. The contractor is erecting four massive concrete columns upon which will be constructed a platform to support the large antenna, the purpose of which is to send and receive highly classified transmissions from various U.S. and foreign agencies. But is the whole thing a hoax?

“CIA sources receive word that a foreign government plans to launch a rocket from Harlan County, Kentucky with a nuclear warhead that will produce an electromagnetic pulse to cause thousands of deaths and injuries across the entire Eastern United States. Satellite data reveal that a Russian submarine transferred the warhead and one person to a fishing boat 75 miles off the coast of Maine, and then the boat took the two to its marina and from there to a waiting van that delivered the bomb to Harlan County.

“A rocket capable of launching the warhead is discovered missing from NASA’s Wallops Island, Virginia facility. It too is traced to Harlan County. The President and his team send two federal agents to Harlan County to recruit Sheriff J. Bert Sterling and his deputies to find and destroy the rocket before its deadly launch planned for Thanksgiving Eve. This suspense novel incorporates lots of mountain humor and characters, including the Harlan County Sheriff’s Department’s feline mascot, Preacher Puss. The reader will enjoy tracking through the maze of deceptions that lead to the startling climax. One reviewer said, ‘Quite a tale, with lots of suspense mixed with humor’.”

Edwards further stated, “Please drop by to chat with me about my books. I’m very proud of my mountain heritage, having been born in Harlan and graduated from Harlan High School in 1958. The people of Harlan are the best, and in all my stories I’ve tried to reflect my love for Harlan County.”

A man from Max Meadows, Virginia, was arrested after allegedly trying to steal from Walmart. Austin Cooper, 27, was arrested... read more