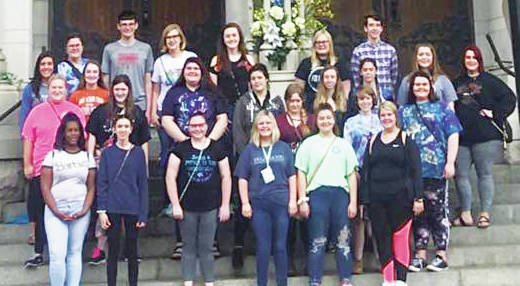 The Harlan County High School Choir recently placed first and was named grand champion at the Music in the Parks Music Festival at Kings Island. Here, the choir is pictured in front of The Cathedral Basilica of the Assumption in Covington.

The Harlan County High School Choir recently participated in the Music in the Parks Music Festival at Kings Island.

The choir earned a Superior rating with an average score of 95.75 and was awarded first place in the 2A High School Choir Division. The choir was also named grand champion of the high school choirs by achieving the highest score of all choirs represented in the festival.

Director Jeanne Ann Lee said, “I am so very proud of this very fine group of students representing Harlan County High School Choir. They have worked so hard perfecting their music even when it wasn’t fun. They have pushed themselves toward excellence and it paid off.”

Lee said there were seven states and 13 high school choirs represented in the event.

As their educational experience, the choir chose to tour The Cathedral Basilica of the Assumption in Covington. The cathedral was inspired by the Notre Dame Cathedral in Paris.

While at the cathedral, the choir was invited to sing one of their competition pieces, Dominus Vobiscum by Jacob Narverud, a chant which translates, “The Lord be with you. Peace, we leave with you and with your spirit. Amen.”