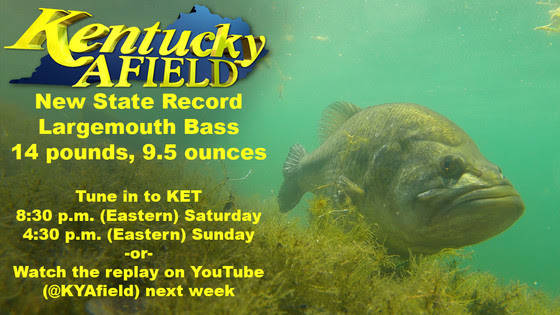 FRANKFORT — Tune to “Kentucky Afield” television this weekend for a profile of the angler who caught the new state record largemouth bass. Hear the story of how Mark Ward, of Evarts, caught a 14-pound, 9.5-ounce largemouth bass on April 19.

Catch a preview of this weekend’s show on YouTube at https://bit.ly/2Y66JLo.

“We have underwater footage from a GoPro camera of a 6.9-pound female on the nest in the lake,” said “Kentucky Afield” videographer Chase Wininger. “A guy walked up and took five casts, caught that female, and left. We weighed on digital scales.”

View this footage on the Kentucky Afield television Facebook page at https://www.facebook.com/KentuckyAfieldTV/.

The show also airs Sunday mornings at 6:30 a.m. on Channel 27 in Lexington and on the CW channel in Lexington on Sunday nights at 11:30 p.m. All times are Eastern Daylight Time. Roku users can find “Kentucky Afield” online as well.