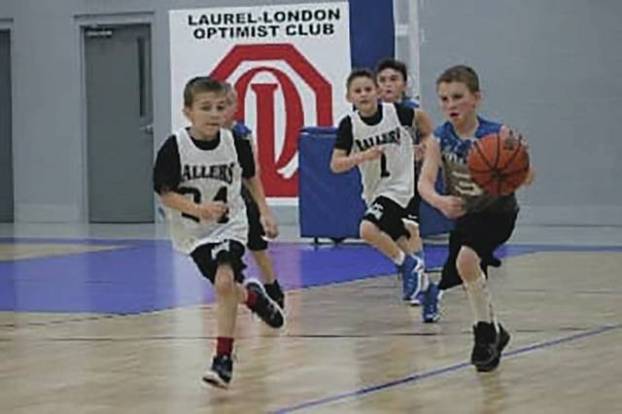 MonStars guard. Trey Creech brought the ball up the court in recent youth basketball action. The MonStars, a Harlan County team of first- and second-graders, lost to a team from Clay County on Saturday.

The MonStars, a Harlan County squad of first- and second-graders, suffered a pair of losses Saturday to the Clay County Wildcats at James A. Cawood.

Clay won 22-8 in the second game. Creech scored five to lead the MonStars, while Blake Johnson scored two and Vance added one.

Carroll also led Cumberland at the plate with two singles. Jayden Sexton had a double. Steven Childers and Liam Garland added one single each.

Tristan West led the Dragons with an inside-the-park homer. Will Cassim had a double and single. Donovan Montanaro and Jared Moore each singled twice.

Thompson led Pineville with a double and single. Havens added a single.

Donovan Montanaro led the Dragons with a triple and single. Jared Moore drove in both Harlan runs with a single. Nate Montanaro added one single.

With a skeleton crew to Somerset due to Saturday’s prom, the Harlan County track team finished 10th in the girls... read more