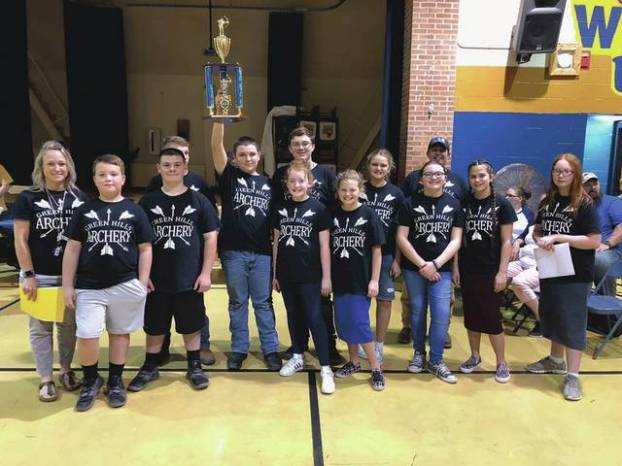 Members of the Green Hills archery team are pictured with their trophy after winning the first county championship in the sport during a tournament Friday at Evarts Elementary School.

Green Hills captured the team title in the first Harlan County Archery Championship Tournament, held on April 12 at Evarts. The Falcons finished with 2,066 points. Black Mountain was runner up with a score of 2,052, followed by Evarts at 2,042, James A. Cawood at 2,020, and Rosspoint with a score of 1,814.

“This team has really put in the hard work and dedication to become better archers. Every archer on the team has improved their scores from the beginning of the year. I’m very proud of each and every one on this team. I would also like to thank all my parents for their support,” Green Hills coach Andy Howard stated.

“It’s been a great season. Just watching all the archers from across the county improve has been the best part. I’ve not only got to work with my kids, but everyone else’s kids during the competitions. It makes me excited, win or lose as a school, seeing any of them do well. Harlan County has a bright future in these archers,” Black Mountain coach Greg Edens said after the tournament.

The event was held as a six-round 10-meter contest following NASP (National Archery in the Schools Program) rules and whistle commands.

“With our second season and the interest in archery across the county growing rapidly, we wanted to treat archery like any other sport and host an official county championship tournament,” Evarts coach Greg Lewis said.

Each archer completed one five shot practice round and then six five shot scoring rounds from 10 meters (32’10”). Each archer had a possible score of 300 points. Each team score is made up of their team’s top eight scoring rounds. Archers shoot the same Genesis bow with a draw weight of 10-20 pounds and Easton 1820 aluminum arrows.

“I would also like to congratulate Abby Grills and Garrison Huff on winning Shooter of the Year in the female and male divisions. Abby is an outstanding young lady who works very hard in everything she does. She is a model student and a devoted Christian. Garrison is an excellent young man who excels in many areas and has a great personality. Both have been a pleasure to have on our archery team for the past two years,” Howard said.

“I am beyond pleased that our archery program has attained notable success within the short time it has been established. I commend each of our student-athletes for their hard work, dedication, and the way they have individually represented their school as well as Harlan County Public Schools,” said Elementary/Middle School Athletic Director Eric Bowling. “Introducing archery last year was another concrete example of how the district has continued to actively seek diversification of not only its academic, but extra-curricular offerings as well.

“We hope our overall programming can meet the individual needs and interests of all students. I especially want to thank our archery coaches for taking the time to work with these student-athletes and for proactively organizing our exciting, in-district competitive events. As we close season number two and move forward, I want to congratulate Abby and Garrison for winning the inaugural Shooter of the Year Awards, Green Hills for capturing first place in the county championship, and all other archery competitors for setting the standard for athletic excellence and sportsmanship within our archery program for years to come.”

Wallins man flown out following collision on US 119

On Wednesday at 2:33 a.m., Kentucky State Police, Post 10 Harlan received a call about a single vehicle collision on... read more