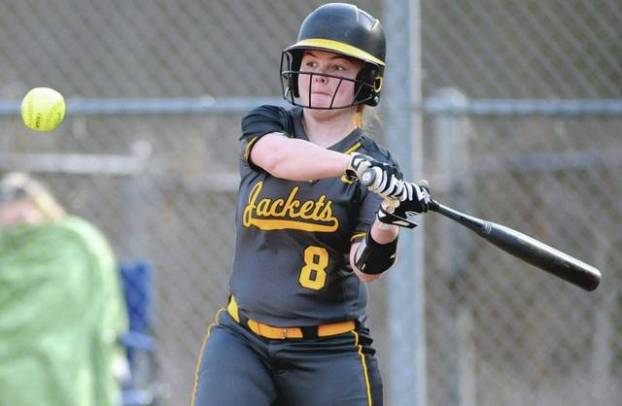 Middlesboro catcher Virginia Marcum made contact with a pitch during Friday’s 13th Region All “A” Classic championship game at Harlan. Marcum had one of the Lady Jackets’ 16 hits in a 15-2 victory.

After surrendering the 13th Region All “A” Classic title last year after four straight championships, the Middlesboro Lady Jackets left little doubt about who is the best Class A softball team in the region in 2019.

Middlesboro rolled past defending champ Williamsburg 23-6 on Monday, routed Lynn Camp 19-9 on Tuesday and reclaimed the championship with a 15-2 win Friday at Harlan to earn a spot in the All “A” state tourney next month in Owensboro.

“They are improving every game,” Middlesboro coach Petie Gilbert said of the Lady Jackets’ fast start this year. “They still have some things they need to improve on, but they are giving the effort and should get there.”

“We are still working on staying back, but we did a good job today,” Gilbert said.

“Middlesboro has some good hitters, and they definitely hit it tonight. I want to give them credit. They have always been a strong hitting team,” Harlan coach Alex Pennington said. “We’re young. We only have three girls out here with varsity experience, so it’s.a learning curve. It’s a rebuilding year, but we’ll get there. We just have to keep working.”

“She’s a freshman and did a good job the other day relieving. She was around the plate today, and we made some nice plays on defense,” Gilbert said.

Payton Bennett, Kaitlyn Cornett and Emma Jones each had singles for the 2-1 Lady Dragons.

Bennett pitched a complete game for Harlan with five strikeouts and one walk.

McCullough doubled to open the game and scored on Sowders’ single. Sowders moved up on Frazier’s hit and scored on a sacrifice fly by Young.

Middlesboro added two more runs in the second inning after McWIlliams reached base with a two-out error. McCullough followed with a hit and came home on Sowders’ two-run single to right.

Harlan scored a run in the bottom of the inning as Kailey Cornett reached on an error and came home on a wild pitch.

Middlesboro broke the game open with six runs in the third inning. McWIlliams and Sowders each drove in two runs with hits. Frazier added an RBI single.

McCullough’s two-run single in the fourth inning pitched the lead to 12-1 after Marcum singled with one out and Ferguson followed with a double.

Reagan Jones walked to lead off for Harlan in the fourth inning and scored on a passed ball.

Sowders, Young and Buis each had hits in the fifth inning as Middlesboro scored three more runs. Young drove in one run and Buis drove in two.

Harlan threatened in the fifth inning after Emma Jones opened with a bunt single, but a diving catch in center by Frazier led to.a double play.

Middlesboro (3-0).plays host to Cumberland Gap, Tenn., on Monday. Harlan will be at home against Bell County on Tuesday and Harlan County on Thursday.

Hazard rallies for win over Patriots New Harlan built a 3-0 lead Monday at Hazard but could not hang on... read more