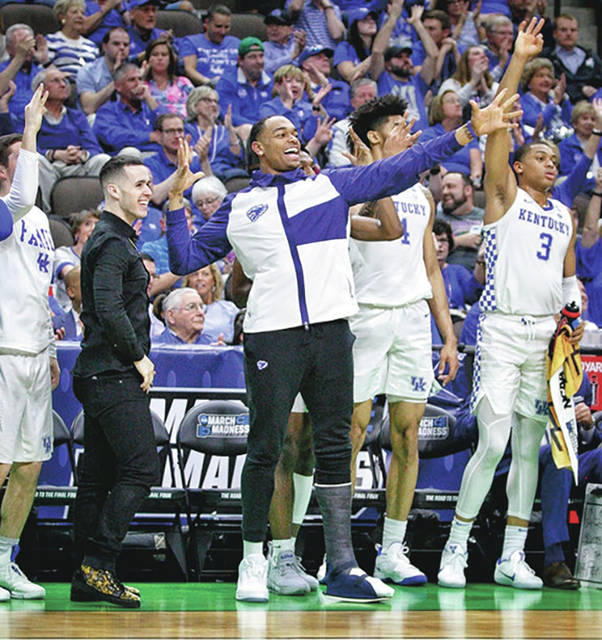 PJ Washington was relegated to cheerleader role for Kentucky. The Wildcats hammered Albilene Christian 79-44 in the opening round of the NCAA Tournament.

JACKSONVILLE (KT) — Kentucky didn’t have its leading scorer but easily took care of business in the opening round of the NCAA Tournament Thursday night at VyStar Veterans Arena.

The 28-6 Wildcats rolled to a 79-44 win over Abilene Christian and will play the winner of the Seton Hall-Wofford contest Saturday here in Jacksonville. The Pirates nipped Kentucky 84-83 at Madison Square Garden on Dec. 8 in New York City.

PJ Washington sat out because of a sprained left foot and watched from the sidelines with the injured foot in a cast. Washington’s status for the remainder of the tourney is uncertain. Kentucky coach John Calipari said the cast helps keep the foot “calm.” Washington told a CBS reporter on a scale of 1-10 the pain at the bottom of his foot was a 10. Washington wasn’t made available for postgame interviews after the contest.

“The option was a boot or the cast,” Kentucky coach John Calipari said. “The cast would speed up the healing, so we said, put the cast on. Whether they’ll take it off tomorrow to check it, I don’t know. If they don’t, he won’t play Saturday, and then they’ll probably try to take it off Tuesday or Wednesday of next week to see how his foot feels.”

Kentucky scored the first eight points and raced out to a 17-3 lead. Abilene (27-7) missed nine of its first 10 shots and didn’t score its first field goal until the 16:21 mark of the first half. The Wildcats led 39-13 at the half.

The Wildcats placed three players in double figures and got most of their scoring in the post. Kentucky tallied 40 points in the paint and outrebounded the opposing Wildcats 44-17. EJ Montgomery pulled down 11 boards to help ease the absence of Washington in the post.

“We all went out there and just competed,” Montgomery said. “If we don’t have (PJ) we all just need to come together and just try to continue to get more wins.”

Keldon Johnson paced the Wildcats with 25 points and made10 of 16 shots from the field. He made three of Kentucky’s four shots from long range. Reid Travis followed with 18 points and nine rebounds. Tyler Herro chipped in with 14 points.

Johnson said the absence of Washington made it “a lot different” and Travis added not having Washington as a sidekick in the post was “tough.”

“He made our team better all season,” Travis said. “We feel like we play off of each other really well, but I feel like with my injury a couple of weeks back, guys had to step up and fit into different roles and really just build their confidence.

“Unfortunately he’s out and we’re happy to have him back when he gets healthy and all that, but we had guys build their confidence over the last couple of weeks with me being out, but I thought it was good. Guys stepped up and we were able to play good minutes.”

Travis and Herro led Kentucky with 12 points apiece, while Keldon Johnson added 10 in the opening half. Herro, Johnson, and Travis made 16 of Kentucky’s 18 field goals in the first frame.

Although Washington is doubtful for Saturday, his teammates are hopeful he will return soon.

“We’re just waiting for him to come back,” Kentucky guard Ashton Hagans said. “We’re not at all concerned. We will see what happens from here.”

Hagans scored four points, had just one turnover and dished out a team-high four assists in his first appearance in the Big Dance. The fast start by the Wildcats gave the team a chance to relax from start to finish.

“It was very nice and a great experience,” he said. “The first-game jitters (are out of the way), so I can just go out and help my team. We’ve just got to stay focused and stick to the game plan and move on from there.”

Travis, a senior, also made his NCAA debut and said “it felt good” to be on the grand stage.

“It’s been a long time,” he said. “This has always been a dream of mine playing college basketball, is to be in the tournament and advance deep in it. This is the first step. I’m just glad I can enjoy it with my teammates.”

Kentucky improved to 29-7 overall in NCAA Tournament games under John Calipari, including a 23-7 mark as a No. 2 seed. The victory was Kentucky’s first win in Jacksonville.

The Wildcats have made four Final Four appearances under Calipari and reached the Sweet Sixteen seven times during Calipari’s tenure at the school.

Kentucky hasn’t lost in the first round since dropping a 74-66 loss to Marquette in the opening round of the tournament in 2008. The Wildcats’ earliest exit from the Big Dance was a loss to Indiana in the second round in 2016.