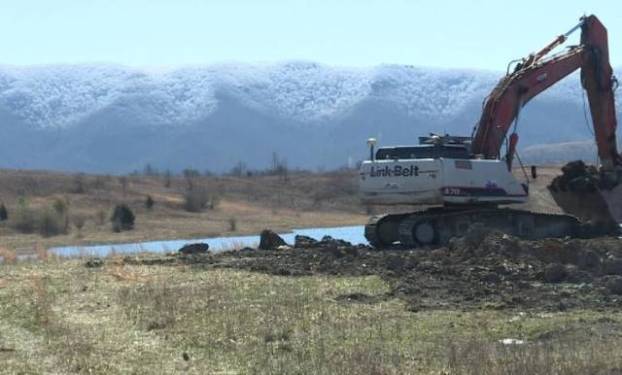 The dream is becoming a reality to many in Bell County as the first piles of dirt were moved for the beginning phases of construction for the Appalachian Wildlife Center located off U.S. 119 across the famous “Bridge to Nowhere.”

The famous “Bridge to Nowhere” in Bell County will soon be leading somewhere. That somewhere is the Appalachian Wildlife Center.

For almost a decade, the center has been a discussion, but now that discussion has turned to reality as ground was broken Tuesday where the center will eventually be built.

“Seeing construction get started on the wildlife center should put any doubt to rest on whether or not this thing is happening,” said Pineville Main Street Director Jacob Roan. “It’s happening. People are coming.”

David Ledford, the Appalachian Wildlife Foundation’s president, said that the center has been his mission for over five years when he came to the property and knew what the future of it would be.

Ledford has been working over the course of the last five years to secure funding through various avenues. Ledford, with help from both U.S. Congressman Hal Rogers and Governor Matt Bevin, was able to acquire $12.5 million through the U.S. Office of Surface Mining and Reclamation Enforcement.

“In Pineville, we have been trying to prepare for this for over four years,” Roan said. “Interest in this project has provided motivation for entrepreneurs to choose Pineville as their place of business. Several more plan to open over the next year.”

Construction on the 80,000 square foot, two-story wildlife center is underway.

“We’re confident in 18 to 20 months it will be ready for the visitors center to be here,” said David Jackson, President of Hacker Brothers Construction.

The center, once completed, will add hundreds of jobs to the region, and they believe thousands more will follow due to the economic impact in the community.

“I’m most excited about our downtown infrastructure and streetscape project, which will begin construction this fall and will be complete before the center opens,” said Roan. “We have been able to fund the $5.5 million project because the city has to compliment the wildlife center.”

Ledford says the view surrounding the center is one of the major assets of its location and the 244 elk roaming the site.

“Some aspects of our project would have never been funded without the promise of the opening of the center,” said Roan. “We hope Pineville will be the small town destination for visitors from across the nation.”

The goal to open the Appalachian Wildlife Center is by June of 2021.

A man and woman are facing burglary charges after allegedly breaking into a house. Pablo Garcia, 34, and Ashley Osborne,... read more