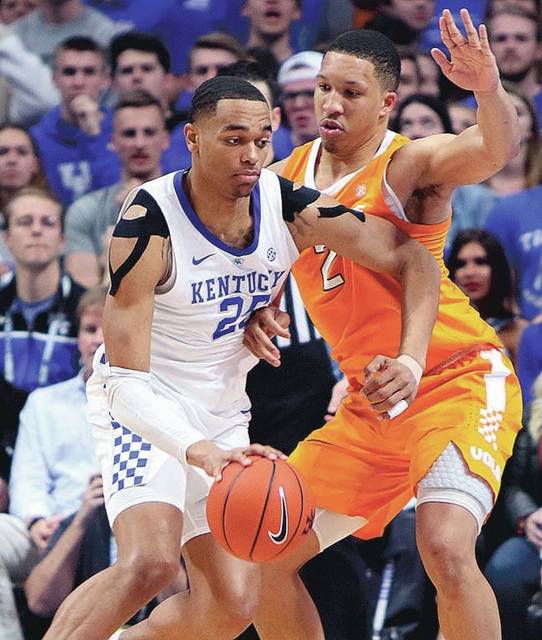 LEXINGTON, Ky. (KT) — In the closing minutes of Kentucky’s 86-69 win over top-ranked Tennessee Saturday night, John Calipari made it known he wasn’t fond of the student section’s chant referring to the Volunteers as overrated.

“I know how good Tennessee is,” Calipari said. “And that’s what I told our fans, enough of they’re overrated. They’re not overrated. (They’re) probably underrated.”

Faced with the task of playing the Volunteers again in Knoxville on March 2, Calipari said Tennessee is deserving of its current ranking.

“They are the No. 1 team in the country,” Calipari said. “They are. They missed some shots they normally make.”

On this night, Kentucky (21-4, 11-2 Southeastern Conference) was clearly the better team and Tennessee coach Rick Barnes’ wasn’t afraid to admit it after a loss that likely will cost the Volunteers the top ranking on Monday. Kentucky’s dominance on both ends of the court left Barnes perplexed.

“They dominated us every way you can be dominated,” he said. “They beat in every way you can be beaten. It is disappointing when you know that you come in knowing they’re going to be ready to play. We weren’t for the challenge. They won the game handily and they handled us handily. You’ve got to give them all the credit.”

Kentucky was the better team in the first of two showdowns between the two conference rivals. Coming off a disappointing 73-71 loss to LSU earlier this week, the Wildcats needed a dose of momentum to carry them through the remainder of the regular season in front of the 3rd-largest crowd in Rupp Arena history.

It was a win Kentucky needed to ease the disappointment of its second conference setback of the year earlier this week that snapped the Wildcats’ 10-game winning streak. Calipari, whose team improved to 4-0 in bounce-back games this season, said the setback to LSU served notice to his squad and added that the setback “probably helped us win this game.”

“That was a tough loss, but we needed it because our team is changing,” he said. “We’re not the defensive team that we’ve been. We have individual changing how they were playing when they were successful and we needed to go back to what we were. Sometimes you’ve got to get knocked in the head to know that.”

The Wildcats put the game away early in the second half with a monstrous 14-0 run and produced a lead that reached 24 at 60-36 with 13 minutes remaining. As expected, Tennessee made a comeback, but the hosts weren’t shaken or rattled by the mini-rally.

“We gave them a chance,” Calipari said. “We had them down big … I could see them making shots and beating us.”

Unlike it did in the loss to the Tigers earlier this week, Kentucky withstood a 13-0 run by the Volunteers (23-1, 11-1) in the second half and ended Tennessee’s 19-game winning streak as the Wildcats remained within one game of Tennessee and LSU in the league standings with six games remaining.

Clearly one of Kentucky’s best performances, the players didn’t refer to the victory as a surprise.

“I don’t want to say it’s a statement, but we just came out and executed,” Kentucky sophomore Keldon Johnson said. “We did what the coaches told us to do and we executed, played hard and came out and fought. We came out to win. We just defended our home turf and that’s what we did. We came out, made shots early and stayed aggressive the whole time. It’s a big confidence booster.”

Kentucky sophomore PJ Washington, who paced the Wildcats with 23 points, agreed with Johnson and said the upset “shows how much we’ve grown.”

“It shows our potential and we’ve got to stick to it, stay focused and keep playing 40 minutes of good basketball like we did tonight,” he said. “We can’t have any lapses and we can’t beat ourselves.”

Kentucky was victorious Saturday night, but another showdown looms on March 2 in Knoxville.

They do and Kentucky’s players plan to stay the course.

“We’ve just got to keep fighting and do what we do,” Johnson said.