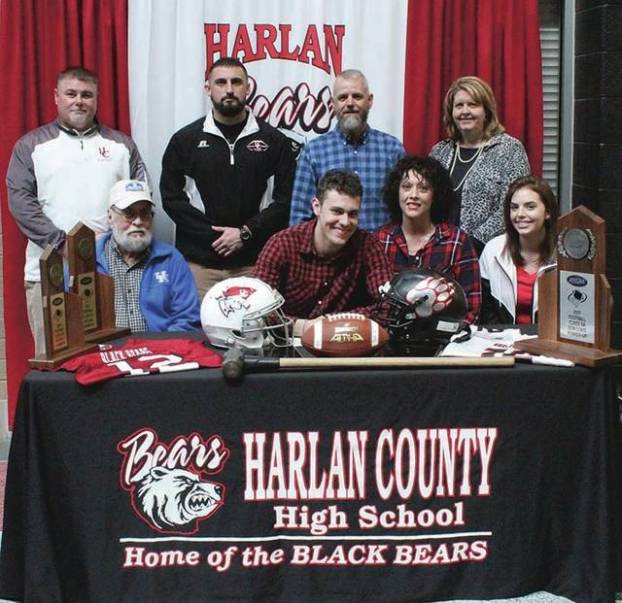 Cochran to continue career with Patriots

Even though his high school career ended last March with a knee injury suffered during spring practice, Colby Cochran never gave up the idea of playing football again.

Cochran, who has spent much of the last year working his way back from the injury, extended his football career Wednesday as he signed with the University of the Cumberlands.

“I think Colby is a great pick up for UC. He is a true quarterback and has all the skills to be a player at the next level,” Harlan County coach Eddie Creech said. “The key, which is usually the case for our local athletes, will be his dedication to sticking it out and being patient early on. Colby’s mental strength and positive attitude has shown the most during this past season. To be able to bounce back and be ready to go play college ball is just a testament to the type of young man he is.”

Cochran was impressed with the Cumberlands during a visit.

“It was one of the most beautiful campuses I’ve seen, and the staff, they are just real people,” Cochran said.

Cochran moved into the starting lineup during the Black Bears’ 1-4 start in 2017 when Jacob Branson went out with a shoulder injury. Cochran helped spark a resurgence as the Bears won four of five games to close the regular season. HCHS then started a remarkable postseason run that included road wins over PulaskI County, North Laurel and Southwestern to give the Bears their third regional football title.

Cochran completed 75 of 150 passes for 964 yards and seven touchdowns as a junior. He added 212 yards rushing on 50 carries.

“Colby is only one of four starting quarterbacks in this county to lead their team to a regional title in the past 29 years,” Creech said. “In 2017, he went 36 straight quarters without a single turnover. That is about as efficient as you can be at quarterback. I am not sure we go on to the state semis if it wasn’t for his performance against North in the second round. He had over 100 yards rushing, a rushing TD and a passing TD. He also completed a huge fourth-and-18 throw to Ty (Simmons) when we were down 14-0.”

Cochran went to work as soon as he could after the injury and Creech said during the signing ceremony that his quarterback is back to 100 percent.

“It was a struggle at first, but I’m constantly working now and I feel real good,” Cochran said. “One big reason I rehabbed so much is I wanted to play football again.”

“We are excited to add Colby to our football team,” said Cumberlands assistant coach J.B. Donahue, a former coach at Harlan High School. “He is an excellent athlete. He led the Black Bears on a great run as a junior. We feel like he has recovered well from surgery, and we expect him to come to camp and compete.”

CORBIN — With visiting Harlan coming off a huge 84-74 win over North Laurel just a day before, Dinky Phipps... read more