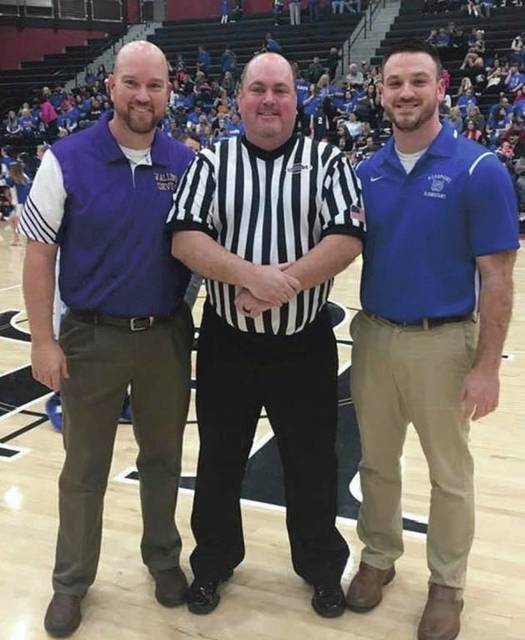 You can be sure when the Simpson family gathers during holidays, basketball is part of the discussion.

Johnny Simpson recently capped his first season as coach of the Rosspoint fifth- and sixth-grade basketball team with a county championship. In order to win the title, Simpson had to beat a Wallins team coached by his uncle, Robert, who was also his former coach.

If that wasn’t enough of a family connection, one of the three officials in the championship game on Friday was John Simpson, Robert’s brother and Johnny’s dad.

“Having to referee a championship game with your son being the head coach of one team and on the other side you have a brother that is the head coach of the other team that also includes two nephews playing, gives you butterflies because you want to make the right call now more than ever,” John Simpson said. “I thought the game went very well and both teams showed great sportsmanship. That made reffing the game a whole lot easier.”

Robert Simpson had the experience advantage in Friday’s game after several successful years in charge of a Wallins program that has long been among the best in the county. Having two sons on the team, Evan and Ethan, made this year’s success even more fun.

“It was kind of a weird feeling being out there,” Robert Simpson said. “We have always had a strong family bond, but we also are all very competitive. To have my two boys, my brother, and my nephew to be a part of that game was a special moment—there were just so many emotions that went along with it. There was that strong desire to win so my boys (and the whole team) could be a part of a championship team. I was proud that my nephew, who I coached in junior high, has had such a successful season in his first year as a head coach. To have my brother out there as a referee just added to those emotions and to the excitement of the game.”

After serving as an assistant under Ralph Napier last year, Johnny Simpson took over as head coach this season and it became clear early in the year that in order to win another championship the Wildcats would have to go through Wallins and his former coach.

“It was definitely an emotional game if not just for the fact that it was my first title game as a head coach, but with all of the other family factors added in it created an unbelievable experience that may never happen again,” he said. “We have always been a competitive family, but the great thing about Robert and I is that even during that 24 minutes of basketball it’s never personal or “too” competitive and then when the buzzer sounds…it’s all over and forgotten. It was tough because I love watching that whole team of great kids and seeing them succeed, especially my cousins, Evan and Ethan, so the game was a little bittersweet. Add to the whole situation, my dad reffing and it was just an amazing night. I wouldn’t have wanted to be in that final game against any other group of coaches, players or fans. I was a Wallins kid and still live in Coldiron, so I have a ton of respect for that whole community. The atmosphere that night at Harlan County High School was one of the best championship environments I’ve ever been a part of and the game itself will be a lasting memory for years to come.”