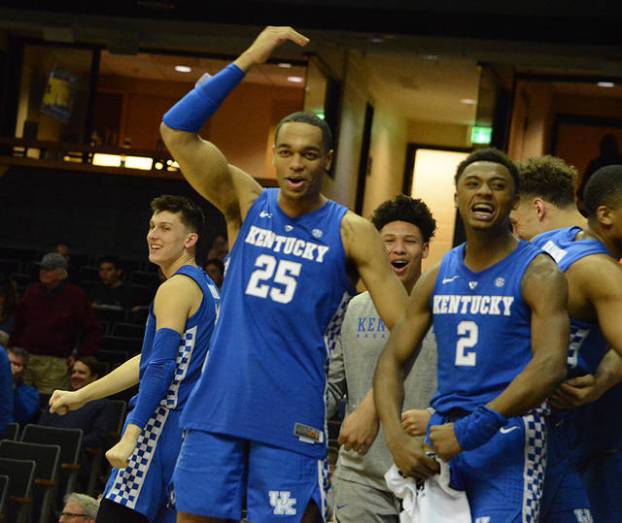 NASHVILLE, Tenn. (KT) — Vanderbilt was no match for Kentucky and fast-improving PJ Washington.

The seventh-ranked Wildcats showed no signs of a letdown after their win over No. 11 Kansas and rolled to an 87-52 rout over the Commodores on Tuesday night in a game that was never close.

Kentucky (17-3, 6-1) led Vanderbilt 45-15 at the break and kept the foot on the pedal in the second half to record an impressive victory in the Southeastern Conference. Washington carried the Wildcats and posted his second straight double-double with 26 points and 12 rebounds.

Washington, who has scored at least 20 points in the past three games, had a double-double (18 points and 10 rebounds) by halftime against the Commodores. The recent outburst by Washington is a series of moments Kentucky coach John Calipari has been yearning for since the sophomore forward arrived on campus more than a year ago.

Aside from his scoring, Washington’s energy, anticipation, athleticism and his aggressiveness has led to his sudden surge on both ends of the court.

“PJ is playing so well, I’ve been waiting a year and a half for him to play this way,” Calipari said. “I’m not letting him slip back.”

Washington said the team’s work behind the scenes is paying off.

Calipari admitted it was hard to keep Washington off the court and added he’s “taking on challenges” more than any time in his collegiate career.

“I told him ‘I’m not taking you out because I’m not screwing this up,’” he said. “You want a break, come out. I told EJ (Montgomery) to deal with it, I’ve been waiting a year and a half for him to play this way. You don’t know when the light is going to come on. You don’t know, but you just see it and the light just went on.”

Washington also made three of Kentucky’s 10 shots from long range and finished within one of tying his career high. In addition to keeping his energy at a high level, Washington has been focusing more on his outside jumper.

“I’ve been working on it a lot this year,” he said. “I’m going to continue to work on it and hope it keeps paying off.”

Even Vanderbilt coach Bryce Drew noticed a difference in Washington from the previous meeting between the two teams. Washington scored only three points in a 56-47 win over the Commodores on Jan. 12 in Lexington.

“Oh my goodness,” Drew said. “He was sensational and watching on film, his game from last year to this year … I’m trying to think if there’s a player more improved in the country. He’s shooting the ball like he’s a No. 2 guard and obviously, with his length, he’s finishing. It shows what hard work on the off-season can do if you stay with it.”

Calipari admitted the Wildcats have been on a “steady path” but isn’t satisfied. “We’re halfway to where I think we can be,” he said.

Although an overwhelming victory, Washington said the Wildcats are already looking ahead to Saturday’s showdown against Florida in Gainesville.

“We’ve just got to keep it going and worry about the next opponent and not think about the game too long,” Washington said.

Nick Richards came off the bench to score 14, Tyler Herro scored 12 and Keldon Johnson 11 (all in the second half). Kentucky’s bench scored 31 after being held scoreless against Kansas.

Three straight trips into overtime against Harlan County have not gone well for the Middlesboro Yellow Jackets, who have been... read more