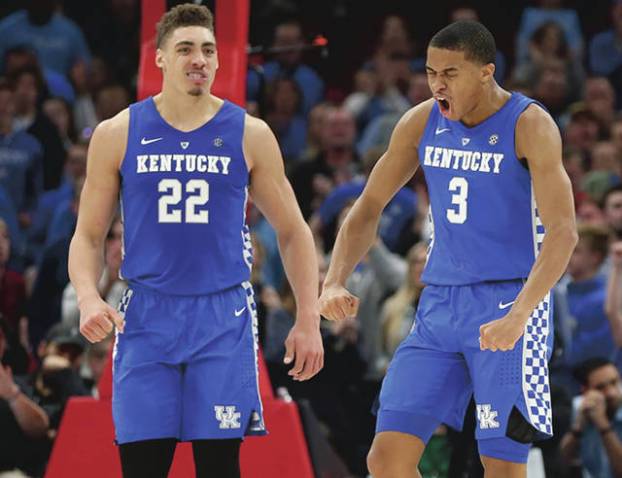 Kentucky’s Reid Travis, left and Keldon Johnson celebrated a big play in an 80-72 win over No. 9 North Carolina on Saturday at the United Center in Chicago.

Kentucky got its first signature win of the season Saturday at the United Center in Chicago.

The Wildcats defeated a ranked opponent for the first time this year with an 80-72 win over No. 9 North Carolina in the CBS Sports Classic. Kentucky (9-2) has won six of the last eight games between the two storied programs and the last three contest have been decided by single digits.

Two years after 19th-ranked Kentucky won a 103-100 shootout over the Tar Heels in Las Vegas, Kentucky slowed the pace and helped ease the pain of a 118-84 loss to Duke in the season-opening Champions Classic more than a month ago in Indianapolis.

“(After the loss to Duke), it was … the season is over,” Kentucky coach John Calipari said on his television interview following the contest. “This is a process … This is a good win.”

Keldon Johnson picked up where he left off after scoring 24 points in an 88-61 victory over Utah last week at Rupp Arena. Johnson, the Southeastern Conference Freshman of the Week, scored 21 points against the Tar Heels and connected on four of seven shots from long range. Johnson scored 16 points in the second half and made back-to-back 3-pointers during a crucial stretch in the second half as the Wildcats were clinging to a single-digit lead.

Calipari has stressed the importance of becoming willing passers and the Wildcats did just that against the Tar Heels. Kentucky dished out 24 assists on 18 made field goal attempts and overcame 18 turnovers. On the flip side, the Wildcats forced 17 turnovers and scored 10 points off those miscues. Kentucky also made nine 3-pointers and have connected on 21 shots from behind the arc during the past two games.

The Wildcats finished with nine blocked shots and didn’t allow a field goal by the Tar Heels in the final 3:53. Kentucky sealed the deal by making four of its last five field goals.

The Tar Heels fell to 8-3 on the season and failed to gain traction against Kentucky after hitting the century mark in a thrilling 103-90 win over Gonzaga last weekend.

Cameron Johnson led North Carolina with 17 points, followed by Luke Maye with 16 and Kenny Williams with 11.

Calipari received his first technical foul of the season at the 11:53 mark of the second half, but proved to be a non-factor down the stretch.

Both teams were whistled for 19 fouls and the Wildcats made 15-of-22 shots from the charity stripe.

Kentucky will play its first true road game of the season against rival Louisville on Saturday at the KFC YUM! Center. The Wildcats are 1-2 on the season in games played away from Rupp Arena. Tipoff is set for 2 p.m.

Isaiah Alexander beat the buzzer with a tie-breaking layup to send North Laurel past Harlan County 64-62 on Saturday in... read more