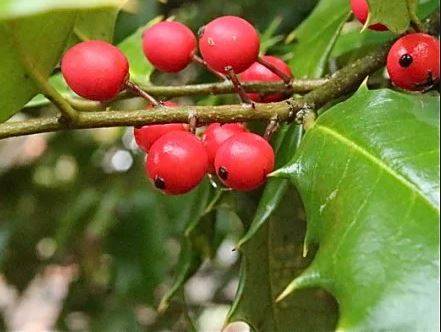 The flora and fauna of Christmas

Christmas tree: Germany is credited with starting the tradition of Christmas trees as we know it back in the 16th century but using evergreens for winter decorating goes back to early Roman times. Initially, trees were decorated with edible ornaments such as apples, nuts, and other foodstuff. Candles were later used to mimic stars on a moonless night, which later went electric. It might interest you to know that in a survey taken in 2004 concerning favorite smells, real Christmas trees in the house came in 8th.

Holly: The bright red berries and green foliage during the drab winter months helped holly become a colorful decorating tradition. But using it around the home traces back to the ancient Druids, who thought it had magical qualities and would have it around to ward off evil spirits and lightening. Early Christians associated the holly with Christ, with the prickly leaves representing the crown of thorns he wore, and the berries were the drops of blood He shed.

Mistletoe: This parasitic plant can be found growing high up in oak, hickory, and other trees. A green plant growing out of another plant was so unusual that mistletoe was also thought to have mythical powers and placed around the home to protect it. In Norse myology it represented love and friendship, which is where the kissing part came from.

Reindeer: also known as Caribou, this member of the deer family is native to the Arctic north and was domesticated to pull sleds centuries ago. So it was an obvious choice to use them in stories about transporting Santa and his sleigh. The first reference to this was an illustrated children’s book written in 1821 called “Old Santeclaus with Much Delight”, and reindeer were really locked into Christmas two years later when the poem “Twas the Night Before Christmas” was published.

Cardinal: while not associated with any holiday tradition, the bright red male cardinal really stands out in a snowy landscape, and so you will get at least one Christmas card with this bird on it. Cardinals are a symbol of faith and warmth.

Camel: this beast of burden is traditionally associated with transporting the Wise Men as they sought the Christ child, however it is not mentioned in the Bible. But it’s certainly feasible that they were used, as they are amazingly designed to get around in arid country. Their feet that have good traction in sand, and they can go without water for long distances. Most mammals become dehydrated when they’ve lost 15% of their body fluid, but camels can lose over 25% and keep going. It’s commonly believed that they store water in their humps, but this is incorrect. They do store fat there, which can be converted to food and water when needed.