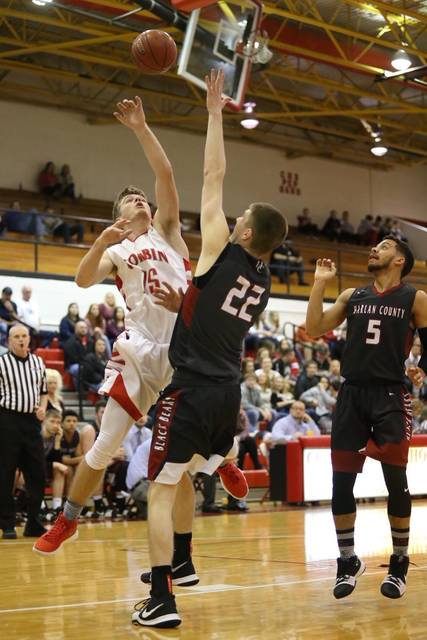 Corbin’s Chandler Stewart went up for a rebound against Harlan County guard Alex Pace in Friday’s game. The Redhounds overcame a late HCHS rally to win 61-56.

CORBIN—The Corbin Redhounds redeemed their district loss earlier in the week with a 61-56 win over strong Region 13 team, the Harlan County Black Bears, on Friday.

Even though they are still without a full roster and short two starters, Corbin’s bench came together to share the wealth between seven shooters for the win.

“Anytime you beat Harlan County, it’s a quality win,” Corbin coach Tony Pietrowski said. “They got a really good program, and Coach Jones is one of the best coaches in Kentucky in my opinion. If you get a ‘W’ over them, you had to do a lot of things well, and I thought our kids did that tonight.”

Corbin grabbed the lead as their next points came from Chase Sanders on a two-point basket and three-pointer.

Ethan Wine rounded out the first with a basket off his own rebounded shot for an 11-8 lead.

“We just need to continue to be the ‘next man up’ and buy into whoever is out there. I think our kids did that today,” Pietrowski shared.

Two lead changes started out the second quarter, and a tie followed quickly behind on a basket from Harlan County’s Ty Simmons.

The Black Bears then took a lead once more, and the two teams exchanged a lead four more times before Corbin added a 10-point run to close out the first half 30-21.

“I thought we were patient offensively. I thought we did a better job on that end. I thought we made some in-game adjustments we’ve been talking about… We’ve struggled in that area, but I thought we saw a lot of that tonight,” Pietrowski commented.

Corbin was able to keep their lead in the third quarter, but not by much.

Harlan County put up a 25-point quarter, led by Andrew Creech’s 12 points, to bring the deficit to one. As the Black Bears brought the game to three, Bailey Rice stopped a run with a basket and the and-1. Rice then added another shot less than 30 seconds later to keep the Corbin lead alive near the end of the third.

“Then, we had a lot of kids step up. It was good to see Bailey Rice and Ethan Wine step in there to get some big minutes and play as well as they did,” Pietrowski added. “Bailey Rice has been battling a ton of injuries in his career, and we’ve been pushing him practice to really get him in some minutes. He stepped in there tonight and it made a huge difference in the game.”

Harlan County took its first lead of the second half after bringing the game to a tie—twice—in the fourth. Simmons grabbed the defensive rebound off a missed Corbin three to score a jumper for two.

Corbin took its lead back, though, on Brody Barton’s first three of the season. The lead was then exchanged three more times, before Chandler Stewart scored with less than two minutes to go, while the Black Bears did not manage another basket.

“We just got to continue to grind, and we are starting to figure some things out. I think ultimately this stretch will make us better,” Pietrowski commented.

Stewart sealed up the win with a final layup and two free throws.

“We got to refocus, get some good days in practice in and prep for Williamsburg come Tuesday,” Pietrowski said.

Corbin heads into a district game against Williamsburg (9-11) on the road on Tuesday, January 30, at 6 p.m.

“I’m proud of my kids. They keep persevering and buying in. We’ve been going through some hardship obviously, but it’s going to make us stronger in the long run and I firmly believe that,” Pietrowski said.

Tyler Cole, a freshman guard, led the 3-5 Bears with 22 points. Elisha Smallwood scored eight, followed by Josh Turner and Michael Simpson with seven each and Hunter Helton and Alex Nantz with two each.

After spending much of the last two nights fighting from behind, the Harlan County Black Bears had chances to win,... read more