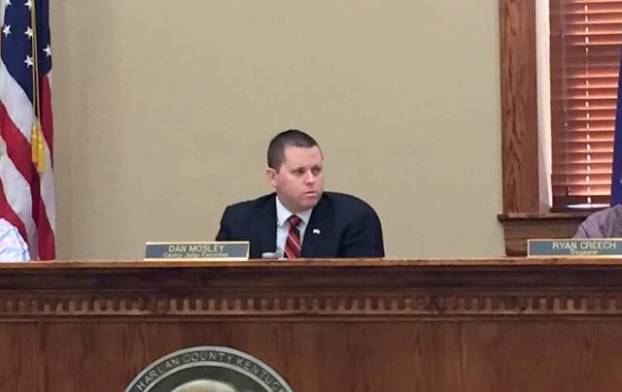 During a recent Harlan Fiscal Court meeting, the court was asked for an update on ongoing issues with the Cawood Water District.

“It’s really a disaster,” Rice said. “I’m just wondering is there any update on that.”

“Cawood Water District had a significant outage recently,” Mosley said. “We were out there helping them, because they were having difficulty because they didn’t have possession of certain things. There were materials they needed we were having to find for them. There was equipment they had that did not work properly, therefore we were getting our equipment and letting them borrow it to get everything repaired in a timely manner.”

Mosley stated he met individually with members of the Cawood Water District board to reiterate the fiscal court’s position.

“We are not the governing body of the water districts,” Mosley said. “The water district has a board, and the board is overseen by the public service commission. We try to our best ability to help when they ask us for help.”

“They lack the equipment they need to function,” Mosley said. “I can say this, they worked extremely hard to get that problem fixed as quickly as they could.”

Mosley said the fiscal court proposed a merger in July.

“What I asked the board to do when we proposed merger was if they weren’t going to vote to merge, that they address certain things right then and there, many of which involved communication,” Mosley said. “They weren’t communicating to us when they had an outage…They had no answering machine, when people would call to report an outage and they weren’t there, nobody knew who else to call.”

Mosley said many of the communications problems have been addressed.

“They have been advertising for a manager position,” Mosley said. “I conveyed my concerns to the board, it doesn’t matter who you hire as a manager if that manager does not have the resources needed to run a district.”

Mosley said the Cawood Water Board is facing difficult decisions.

Mosley mentioned the service has improved since summer.

“They have implemented things that have made things better,” Mosley said. “This particular situation was one of those freak accidents, but they still should have had the materials they needed to be able to operate and solve the problem. They did not have the necessary materials, which added some time to the equation of getting everything resolved.”

Mosley said the fiscal court has made its position clear on what they believe needs to be done.

“BMUD is still willing to accept Cawood under their umbrella,” Mosley said.

Rice advised not everyone thinks a merger is a good idea.

“That scares a lot of people that are using Cawood water, as bad as it is,” Rice said. “I’m not throwing anything at BMUD, but they don’t have a spotless reputation. There was a fellow who came by my shop this morning, and he had heard I was trying to get involved. He said, ‘whatever you do, don’t let them hook us up to BMUD, we don’t want that.’”

Mosley said he used BMUD service at his home, and had only been without water twice in 12 years. He added Green Hill Water District merged with BMUD, which improved service for those customers.

Rice also stated the problems have more to do with the water lines themselves rather than which district oversees the area.

Mosley said the Cawood Water District is comprised of good people, but there are so many issues with the system the board may be having difficulty prioritizing the problems.

“They’re in bad shape,” Mosley said. “They’re going to have to make some decisions to move this district forward, and I think they realize that.”

A Coldiron man was sentenced to a five-year prison sentence recently in Harlan Circuit Court after a jury found him... read more